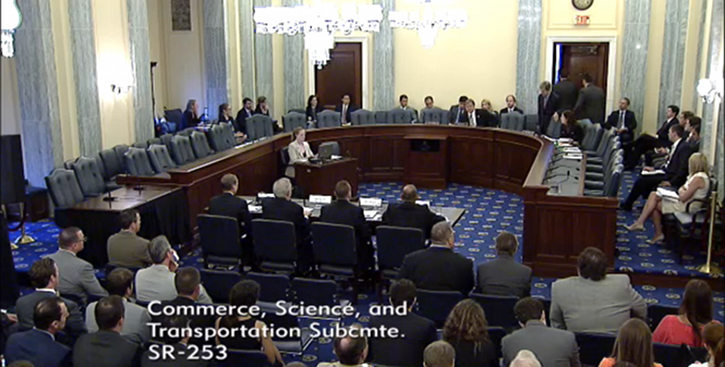 On Wednesday, the US Senate Subcommittee on Consumer Protection, Product Safety and Insurance held a hearing on “The Expansion of Internet Gambling: Assessing Consumer Protection.” Let’s face it: nobody expects to emerge on the other side of this type of hearing clutching any earth-shattering revelations or concrete proposals, and indeed, the most striking element of the whole proceeding was the presence of the fetching blonde seated behind the elected representatives (many visual images of whom have been provided for your enjoyment). But hey, CalvinAyre.com willingly endures this ponderous political posturing so you can reduce 90-plus minutes of tedium to a brisk three-minute read-through, so without further ado… 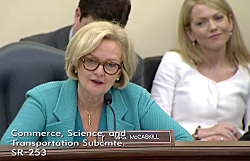 The hearing was chaired by Sen. Claire McCaskill (D-MO), although she ducked out of the proceedings after only a few minutes. In a possible sign of just how unimportant the hearing was in Washington political circles, the subcommittee lists 13 members, yet only six or seven actually showed up (as evidenced by the ranks of empty chairs depicted above).

McCaskill opened the festivities by slamming the US Department of Justice for having “eviscerated” the 1961 Wire Act two days before Christmas 2011, a move that “liberated” individual states to decide for themselves what type of online gambling was appropriate for their residents. McCaskill credited these states with having done a “relatively good job” regulating brick-and-mortar casinos, but suggested they were ill-equipped to handle the online realm, where problem gamblers were free to “satiate their destructive habits.” (Speaking of, trying very hard not to focus on the blonde right now.) McCaskill characterized online gambling as “inherently an interstate matter” and therefore Congress had an important oversight role to play. 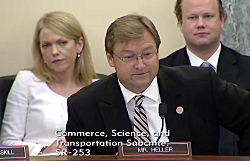 From there, McCaskill tossed the conch to Sen. Dean Heller (R-NV), who also took great relish in slamming President Obama’s DoJ for its “unilateral” decision to “change the way we do business here in this country” just so that Obama’s “friends in Illinois and New York could sell lottery tickets online.” Heller, who comes from a state with no lotteries whatsoever, showed particular relish in savaging state lotteries for their desire to offer “instant cash prizes” online. Heller said teeth needed to be restored to the Wire Act and other gambling legislation before states became dependent on online gambling revenue (at which point, the irony meter on my laptop exploded).

Sen. Roy Blunt (R-MO) was up next, and he took a more supportive stance on state lotteries, which he felt shouldn’t have to compete with “unlawful, unlicensed, unregistered” online gambling sites. Blunt was a member of the House of Representatives when he voted in favor of the legislation that ultimately became the Unlawful Internet Gambling Enforcement Act (UIGEA) and he bemoaned the Wire Act rethink’s “unintended consequences.” Sen. Brian Schatz (D-HI), who represents one of only two US states that permits no gambling whatsoever, said he worried about online gambling’s lack of respect for state borders. CANTERBURY TALES
At this point, the proceedings welcomed the four private sector witnesses who’d gathered to offer their testimony. First up was Chuck Canterbury, president of the Fraternal Order of Police (FOP). Chuck claimed that the FOP wasn’t advocating for any expansion of what types of online gambling are deemed unlawful, but reiterated the group’s position that law enforcement was poorly served by relying on 50-year-old legislation to combat illegal online activity. Canterbury said the DoJ’s Wire Act rethink needed “a Congressional fix.”

Canterbury noted that a good chunk of the 11 individuals indicted via the April 15, 2011 ‘Black Friday’ action against online poker companies were residents of Costa Rica, which a 2002 State Department report had labeled a “bridge country” used by criminal organizations to launder money. Canterbury then veered off into the first of the day’s many references to terrorists, whom Canterbury claimed “are or could be using [online gambling] to launder funds.” (Much like Canterbury is or could be using the same prostitution services once enjoyed by former New York Gov. Eliot Spitzer. Right, Chuck? We just don’t know for sure, do we, Chuck? Do we?)

To Canterbury’s credit, he acknowledged that terrorists weren’t above using “any type of internet sales – not just gambling – to launder money.” Canterbury wasn’t sure that there was any easy technological workaround that would prevent money laundering, but suggested technology could help mitigate the likelihood of underage and “trouble gambling.” 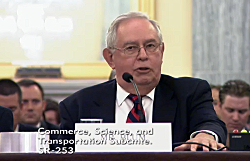 THE BLUM IS OFF THE ROSE
Money laundering was the prime focus of Maryland attorney Jack Blum, who stated straight off that he thought “gambling is dumb” and that he wasn’t there at the request of any client. Blum reflected on gambling’s historic ties to organized crime by referencing Meyer Lansky’s use of Cuban racetracks to launder money. More recently, Blum described “planeloads of cash” coming into St. Marten, where it was deposited into banks by an “Italian Mafioso” who controlled casinos on the island that had “no customers.”

Blum said the “question of who owns a casino is pivotal, and that’s why casinos have to be licensed.” Blum believes that “in truth, a casino is a bank” but acknowledged that licensing and regulation hadn’t prevented respected financial institutions like HSBC from laundering “four trillion dollars” on behalf of shady customers. Regardless, Blum said “sophisticated” federal regulation was required because “the cat’s out of the bag” now that the Wire Act has been “undermined.” Blum even had a go at Bitcoin, which he referred to as an “artificial currency” that took online transactions “out of the realm” of the banking system. 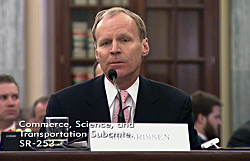 I’M AFRAID I CAN’T LET YOU GAMBLE, DAVE
Tom Grissen, CEO of biometrics software outfit Daon Inc., attempted to get things back on track by using his IPad to demonstrate how technology could easily determine that a customer was who the site believed him or her to be through the use of photo-sharing, voice-recognition and geo-location. Grissen said biometrics utilized “factors that are uniquely you” and which were accessible to consumers via most modern smart devices.

McCaskill suggested there would be “some real friction” if the “kajillions of people who have tweeted at me” over the past 10 days were forced to submit unflattering selfies every time they wanted to go online to gamble. McCaskill suggested people were “attracted to online poker because they don’t wanna [gamble] in public.” (Hey, if Sheldon Adelson would let me play blackjack at the Venetian in my soiled undergarments, we might have a deal.) McCaskill expressed concern that online gambling would “open a whole new treasure trove of data” that criminals could exploit “to make a quick dollar and then switch an IP address.” 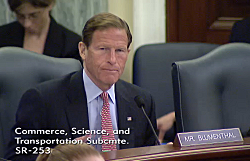 Sen. Richard Blumenthal (D-CT) also brought up the notion of data security, prompting Blum to say that if he was “a Russian crook, I think I’d open up a casino online and steal credit card information, go out of business a week later and who’s to catch me?” (Edward Snowden?) Blum also suggested that while biometrics might confirm that you are who you say you are, “it won’t tell you how that account is being used or what’s an appropriate level of use … You really need an anti-money-laundering regime in the casino to make it work.” 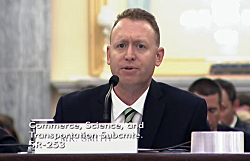 WON’T SOMEONE THINK OF THE CHILDREN, THE PROSTITUTES AND THE CHILD PROSTITUTES?
Catholic Advocate leader and noted pineapple impersonator Matt Smith claimed that 110% (or thereabouts) of US children had participated in “some form of online gaming” – really, how do the makers of Club Penguin sleep at night? – which made these fresh-faced unspoiled American youths “attractive targets” for “illegal and fraudulent operators.” Or the perfectly legal kind, as Smith cited a quote from the “CEO of a leading provider of lottery services” saying that if lotteries were “beat to market” by online gambling firms, the lotteries would lose the ability to attract “younger players.” (Not ‘young,’ mind you, just younger than the rapidly thinning ranks of octogenarians who currently make up the bulk of lottery purchases.) 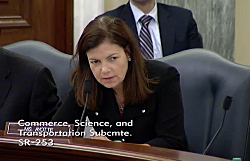 Heller also illustrated the alleged dangers online gambling posed to children by relating an anecdote about some parent claiming his ‘kid’ had gambled away the college tuition. Heller then held up his own iPad – honestly, if anyone at all benefited from Wednesday’s proceedings, it was Apple – on which he claimed to have loaded an international online gambling website. Sadly, we couldn’t make out which company was enjoying its 15 seconds of fame/infamy, but we’ve provided photographic evidence for you CSI types to examine, which also contains one final shot of Blondie, because otherwise, there really was little point in reading the above recap of today’s testimonial tripe. 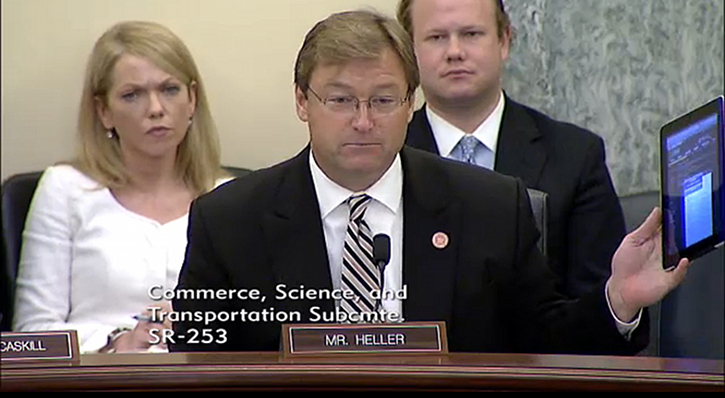