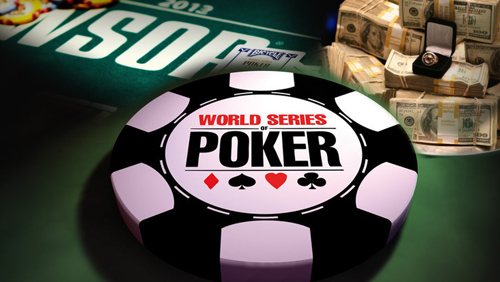 Live poker tournaments are thriving around the world today thanks to dozens of regional and local tours that have sprung up over the last few years. The WSOP, being the oldest and grandest of them all, continues to lead the way with its recently announced 2013 schedule. It’s the biggest schedule of any live tournament series in the world with 62 events, with buy-ins ranging from $500 to $111,111. Some of the key tournaments on the schedule reflect trends in a changing industry.

One of the trends from recent years that continues in 2013 is the variety of the schedule. In the earliest days of the poker boom the WSOP migrated to a schedule that was almost exclusively hold’em. That hasn’t been the case for a while now, and this year’s schedule features events in most standardized forms of poker and several different mixed-game tournaments.

Tournaments with small buy-ins and huge guarantees have become popular since the economic downturn began a few years back. This year’s WSOP gets in on the act with the “Millionaire Maker,” a one-day, two-flight, single re-entry, $1,500 buy-in no-limit hold’em tournament with a guaranteed first-place prize of $1,000,000. That kind of purse is usually reserved for the heavy hitters only, which could attract quite a crowd.

High roller tournaments are just as popular as the tournaments at the other end of the spectrum. The WSOP got in on that action in the biggest possible way last year with the Big One For One Drop, which featured a $1,000,000 buy-in and the biggest prize pool in tournament poker history, making Antonio Esfandiari the richest champion of all time.

This year they’ve stepped back from an exact repeat the event – wisely, I’d say, since it was such a huge success. But they are going to offer a $111,111 One Drop High Roller tournament, which is more in line with most of the biggest high roller events that run around the world. Unlike the Big One there is no cap on the field for this tournament, which means that this tournament could (at least in theory) set a new record for the largest tournament prize pool.

Over the near-decade that’s passed since Harrah’s originally bought WSOP, it has become more organized and now operates more like a giant sporting event than an old-school poker tournament. One of the aspects of this year’s schedule that’s reminiscent of the trial sports at the Olympics is the $5,000 Open Face Chinese Poker tournament that will be held toward the end of the Main Event. It will not see a bracelet awarded but WSOP officials will be observing to see if it would be a viable tournament format for future WSOP schedules.

Some of last year’s new no-limit hold’em events have returned for 2013. The Antes-Only event has no blinds, substituting an escalating ante structure. The four-max event is self-explanatory, and the “Mix-Max” event sees the size of the table change as the event’s field is reduced.

The biggest six-max no-limit hold’em event on the schedule is considered one of the most prestigious events these days, given that its majority population is online high-stakes short-handed specialists. For the past two years that tournament has featured a $10,000 buy-in, but this year it returns to its 2010 level of $25,000. This is a clear case of the WSOP recognizing that the players who are going to buy into this event are often the same ones who are willing to play high roller events. That should be good for the final numbers – even at half last year’s size, this tournament would still have a bigger prize for the winner.

Unlimited re-entry events were banished from the WSOP several years back under the logic that they allowed players to “buy” bracelets. Plenty of mid-tier pros disagreed and argued that rebuy tournaments were a valid form of tournament poker involving different strategies than freezeouts, but to no avail. This year the unlimited rebuy finally makes its comeback as the “Little One For One Drop,” with a $1,111 buy-in.

With two starting flights and unlimited rebuys for the first four levels of each, there should be a pretty big field for this event. It’s conceivable that it could not only raise more money through the small donations than some of the WSOP’s past Ante Up For Africa charity tournaments, but do so without any ugly behind-the-scenes peer pressure on the winner to donate the entire purse just because a hedge fund manager did the same thing once upon a time.

Keeping the men out

The WSOP can’t legally keep men from entering the Ladies Championship, and in the past it has usually seen at least a few of them play – sometimes in drag, sometimes wearing their everyday clothes accessorized with the hateful stares of thousands of women. This year the WSOP has come up with a novel twist to discourage men. The official buy-in for the tournament is $10,000 – a ten-fold jump from the past – but women will be given a 90 percent discount, meaning only men will pay the full $10,000. In other words, the WSOP has just instituted tournament poker’s first Asshole Tax. Good for them.