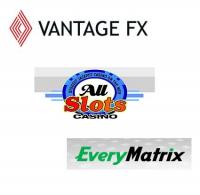 The London-based Forex trading dealer has added Oscillator Had EA – an expert advisor that focuses on combining the CCI and moving average indicators – and Average True Range EA – which defines the movement range in a currency over a predefined time period – to its Expert Advisor Lab.

Calculating a line of oscillation, Oscillator Had EA trades infrequently but can be useful in defining where in the cycle the overall trend is sitting. The stop loss is 145 pips.

As for Average True Range EA, confirmation is required using the Donchian Channels and Exponential MACD, in which the Take Profit is 190 pips.

Though Forex comes with a health warning as trading may not be suitable for all investors – so the company asks if you’re fully aware of the risks involved before trading. You’ve been warned…

Microgaming powered All Slots online casino has kicked off 2012 with the introduction of two new slot games: The Grand Journey and Megaspin Break da Bank Again, with double loyalty points rewards through to this Wednesday (11 Jan).

The Grand Journey is a five-reel, 30-payline slot game loaded with Wild symbols and scatter symbols which award 15 free spins. A round of free spins begins with a 2x multiplier and rises with each non-winning spin, for up to a 10x multiplier.

Megaspin Break da Bank Again promises quadrupled “Winning Power” with the opportunity to play four games at once. This is a new version of the 2008 nine-payline slot game with 25 free spins and a 5x multiplier.

The Jackpot Factory’s Vice President for Player Affairs, David Brickman (no, not Beckham), said: “We’re getting the New Year off to a bang with free spins, huge multipliers and slots excitement all around,” says. “This is just the beginning of some great things to come in 2012.”

The single and multi-player games set to launch with XPRO are: TeamBet, Royalbloodcasino, 24winbet and Jetbull. The Artemisbet game is already live, the company said in a statement.

XPRO CEO, Itzik Alon, said: “We are constantly working on adding new games. Our newest release is an innovative live dealer version of the popular Texas Hold’em. In this multiplayer version your poker network will be able to play with our Live Dealers within your poker player’s liquidity, adding an exciting new dimension to the game

This announcement is EveryMatrix’s second of its kind after it revealed a deal with iGame just last week.