Hillary Clinton praises internet freedom, but US doesn’t practice what it preaches 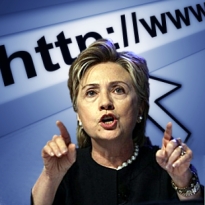 Reason.com’s Jacob Sullum had a lot of fun taking US Secretary of State Hillary Clinton to the woodshed for her recent speech at the Freedom Online conference in the Netherlands. Clinton used her time at the podium to condemn foreign governments’ attempts to censor their citizens’ online speech and restricting access to sites expressing viewpoints these regimes found intolerable. Saying governments around the globe “must resist the urge to clamp down,” Clinton claimed the US “wants the internet to remain a space where economic, political and social exchanges flourish.” Clinton decried countries where citizens “are blocked from accessing entire categories of internet content,” saying that “when ideas are blocked, information deleted, conversations stifled, and people constrained in their choices, the internet is diminished for all of us.”

As Sullum notes — and the online gambling sector is all too aware — the US government’s actions haven’t always measured up to the lofty ideals it voices in public. Online gambling execs from companies operating perfectly legally in their home territories have been arrested the minute they set foot on US soil, gambling domains have been seized and search engines have been intimidated into scrubbing all traces of these companies from their databases – actions that have led to what many US citizens would consider a thoroughly diminished internet.

BECAUSE YOU CAN’T, YOU WON’T AND YOU DON’T STOP
Beleve it or not, things are about to get much, much worse. TechDirt has a truly unbelievable tale of the Kafkaesque clusterfuck that can result when the US government goes rogue. The story revolves around influential hip-hop music blog Dajaz1.com, whose domain was seized by the US Immigration and Customs Enforcement (ICE) in November 2010 for allegedly infringing on music copyrights. Visitors to the site were greeted with the same ICE/DoJ screen that greeted customers of the domains seized on Black Friday and Blue Monday.

Thing is, the allegedly pirated music posted on Dajaz1 had been provided to the site from music label execs looking for the kind of free promotion they literally could not buy. The infringement complaint was made by an anti-piracy exec at the Recording Industry Association of America (RIAA) who was clearly out of his depth in understanding how the modern music industry promotes its product. Worse, ICE appears to have simply taken this RIAA drone’s word that infringement had taken place, and released their hounds without conducting any real investigation of its own.

From there, the situation devolves into farcical, if not outright criminal behavior by US authorities. Dajaz1’s attorney Andrew P. Bridges filed a legal request for return of the domain, but the authorities didn’t respond. Instead, they announced they would proceed with filing for permanent forfeiture of the domain. In response, Bridges told the authorities his client would challenge this move.

The government claims it was granted two more secret extensions, neither of which Bridges was allowed to observe, participate in, or even read. The authorities simply told Bridges it would have to trust them. Finally, after Bridges again inquired as to the state of the forfeiture process, the government relented and returned the domain this past Thursday (8th) – over a year after it was seized. No charges were ever pressed, mostly because no crime had been committed. As TechDirt’s Mike Masnick emphasizes, the scariest aspect of this case is the clear determination by the government to ensure that its voice was the only one the court heard on this issue.

WE HOLD THESE HYPOCRISIES TO BE SELF-EVIDENT
Given cases like Dajaz1, is it any wonder that people are up in arms over the provisions in the proposed SOPA and PROTECT IP acts that would grant a ‘private right of action’ allowing individuals to request seizure of domains? Given Dajaz1’s year in limbo, is it any wonder that the promised “protest procedures” that would allegedly remedy wrongful seizures aren’t taken seriously by free speech advocates?

With the US Republican primaries in full swing, anyone within earshot of a TV set can’t escape hearing the phrase “American exceptionalism.” As it applies to internet freedom, this phrase equates to “do as we say, not as we do.” It can be argued that hypocrisy was enshrined in America’s DNA after a bunch of slave-holding white men had the balls to enshrine the lofty sentiment that “all men are created equal” into the country’s declaration of independence. But it appears that, to paraphrase Orwell, some countries are more equal than others.