WSOP’S BIG ONE for ONE DROPTM OFFICIALLY BECOMES A BRACELET EVENT AS DUHAMEL, ELKY & MORE ADDED TO LIST OF ENTRANTS 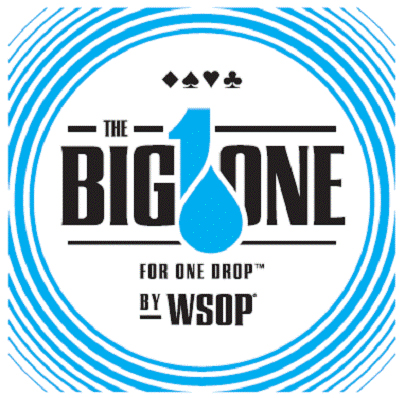 Although the 2012 WSOP schedule isn’t expected to be announced before the New Year, one eye-popping event that is well underway is the Big One for One Drop, the $1 million buy-in poker tournament being planned as part of the 43rd Annual World Series of Poker at the Rio All-Suite Hotel & Casino inLas Vegas.

The Big One for One Drop is slated to take place from July 1-3, 2012.  Amazingly, the tournament already has commitments from 22 players – the minimum player threshold requirement making it an official bracelet event.

The tournament is the creation of ONE DROP Chair and Cirque du Soleil® Founder Guy Laliberté.  He approached fellow Montrealer and Caesars Interactive Entertainment CEO Mitch Garber earlier this year with an idea to take poker players’s generous charitable nature and combine it with the WSOP’s poker expertise and global reach to create an unprecedented poker tournament that also raises awareness and funds for a dire worldwide cause – access to water.

During the November Nine festivities last month in Las Vegas, Laliberté took to the stage to announce several new additions to the event including 2010 WSOP Main Event champion Jonathan Duhamel and 2011 WSOP bracelet winner Bertrand “ElkY” Grospellier, who officially threw their hats into the ring alongside Laliberté friend Sean O’Donnell during the announcement.

Duhamel said: “I am absolutely thrilled to participate in the biggest poker event ever organized.  One million dollars is a lot of money but my participation comes naturally, being a spokesperson for ONE DROP and because of my attachment to such a great cause.  Life starts with water and because of its uneven distribution, a person dies every 20 seconds. The Big One for One Drop will raise $111,111 per participant, which will definitely prove the poker community attachment to ONE DROP.  As for me, I personally commit to give 5% of my winnings from this tournament to ONE DROP.”

O’Donnell added: “I am speaking in the name of a group of friends of Guy that got together and organized a series of mini satellites in order to qualify one of us for the Big One for One Drop.  Although, individually, we couldn’t buy a seat, it is important for us to get involved and give back in support for ONE DROP and our friend Guy.”

From each entry fee, $111,111 will be donated to ONE DROP with a goal of raising enough money for a legacy project that will see a needy country receiving access to clean water.

That will leave $888,889 of each entry fee going directly into the prize pool, as the event will be rake-free.  Thus, with 22 committed participants, the expected prize pool is nearly $20,000,000 already.  The event intends to take a maximum of 48 players.

At the final table, Laliberté also announced the launching of a campaign designed exclusively for the poker community called : All In for ONE DROP, with a special focus on social media. Thus players who want to get involved, but cannot enter the BIG ONE, can also contribute by becoming poker ambassadors for ONE DROP.  Some have already committed to donating a percentage of their annual tournament winnings, as well as wearing the All In for ONE DROP special merchandising and spreading the word about this important  cause. This initiative shows that there are many ways poker players can get involved.

“Every gesture is important,” said Laliberté.  “The poker community is very generous and it is not only about the one million dollar buy-in event, there are other ways that poker players can make a difference.”

Plans call for ESPN to televise this event.  A specially-designed WSOP platinum bracelet will be awarded to the victor, along with what is expected to be an eight-figure first place prize.

The tournament, to be played as No-Limit Hold’em, is expected to pay out a record 20% of the field—double the typical poker tournament payout structure. For example, if 30 players enter, six will cash.

Final funds are expected to be due 14 days prior to the event commencing. Subject to the rules of the tournament, anyone age 21 or older is eligible as long as they have the $1 million entry fee.

Here is the list of the players who have confirmed and allowed us to publish their names.  Others players have confirmed their participation but wish to remain anonymous, at this point:

Several additional names are expected to be added in the coming months, with additional announcements to come.

The tournament will bring together individuals in an unusual way for the cause of water for all. It is the belief of the organizers that this event will attract high-net-worth individuals from all over the globe and across a wide range of businesses and occupations.

The Big One for ONE DROP is an unprecedented effort to raise awareness of water-related issues amongst the poker community and to raise funds to allow ONE DROP to continue to deliver on its important mandate. Funds will be directed to ONE DROP projects around the world, where the team is hard at work dealing with the local water crisis.   ONE DROP is a non-governmental organization aiming to fight poverty worldwide by supporting access to water and raising each and every one’s awareness of water-related issues.

ONE DROP—an initiative of Guy Laliberté, Founder of Cirque du Soleil—is a non-governmental organization established in Montreal,Canada and active worldwide. ONE DROP’s mission is to fight poverty by supporting access to water and raising each and every one’s awareness of water-related issues through its distinctive approach based on social arts and popular education. In theU.S., ONE DROP is a public charity that undertakes innovative activities in which water plays a central role as a creative force to generate positive, sustainable change worldwide. ONE DROP continues to reach out to the world to realize its dream of safe water for all, today and tomorrow. To learn more about ONE DROP, visit ONEDROP.org.