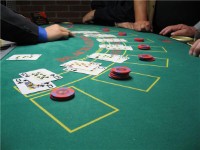 It’s making a lot of sense why Delaware shot down the proposal for gambling expansion earlier this year in March. The casino business isn’t making anywhere near the money they were making last year. In fact, many of them are claiming they’re struggling to survive and are hoping a tax break will be their lifeline.

Downs Hotel and Casino CEO Ed Sutor, “This is the first time in Dover Downs history we have lost money. And in our second quarter we reported to the Securities and Exchange Commission that we made less than 1 percent.” –WBOC 16

As it stands right now, Delaware officials are considering cutting taxes on the state’s three casinos, allowing them to keep more of their profits.

Revenue from slot machines in Delaware has fallen by 13 percent compared to last year.

A poor economy and competition from Maryland opening casinos last year to draw gamblers away from Delaware’s three casinos, has hurt the bottom line. But the high tax rate the casinos are burdened with hasn’t helped either. It’s getting to the point where casinos are considering shutting down.