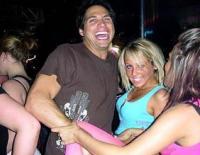 Joe “Meatstick” Francis has proved that wankers sometimes get a couple of good cards on the flop. The Girls Gone Wild producer prevailed in a criminal case brought by casino magnate Steve Wynn relating to a $2.5million casino business debt from a while back. The criminal case was thrown out of court as the Wynn Las Vegas resort waited too long (16 months) to redeem a casino marker. The civil case is still ongoing with the court ruling that Wynn and prosecutors had lost their chance to prove Francis had committed a crime.

Unrest between Francis and Wynn began way back in February 2007 when the soft-porn baron signed markers worth $2.5m at the resort. Francis paid $500k back and “Meatstick” seemed to think that he could negotiate some kind of bargain with Stevo as if he were a college bird that was desperate to cash in on her nips. The GGW man then tried to fob off Wynn with $2m of money that he would pay if it didn’t come back that it was his. The problem was he would only deliver the money in brown paper bags.

Francis claimed earlier in the public back-and-forth row that Wynn had threatened to bury him in the Nevada desert. That set off another law suit between the two with Wynn taking a defamation suit that is set to commence shortly.

On production of the verdict, Francis’ attorney, David Houston of Reno, puffed out his chest whilst stating, “The Wynn Group’s heavy-handed approach to collect money from Mr. Francis has failed utterly and completely.”

It doesn’t detract from the fact that Francis is, and always will be, part of the wankers club alumni.