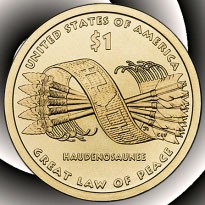 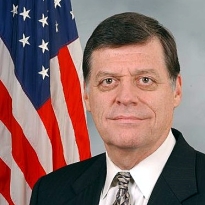 On Tuesday, a US congressional panel held hearings on proposed legislation that would give the federal government a broader mandate to place land into trust for Indian tribes, a move that could lead to expanded tribal gaming operations. Currently, the US Interior Department can only take land into trust on behalf of tribes that were federally recognized by the Indian Reorganization Act of 1934, a practice that was upheld in 2009 by the US Supreme Court. Rep. Tom Cole (R-Okla.) has since authored a bill that would overrule this “unacceptable” situation, which Cole claims “creates two classes of Indian tribes.” Chickasaw nation member Cole (pictured right) is the only serving House member who is a member of a federally recognized tribe.

Cole’s bill would authorize the Interior Department to take land into trust for tribes regardless of when they were officially recognized by the feds, although Cole’s bill exempts Alaskan territory (which would seem to create a different set of two classes, but whatever). A competing bill, introduced by Rep. Dale Kildee (D-Mich.), would apply to all tribes and territories, without exception.

Speaking in opposition to the plan was Cheryl Schmit of Stand Up For California, a group that acts to check the expansion of Golden State gambling. Schmit warned lawmakers that they needed to consider “communities of non-Indian citizens who will directly and financially suffer the impacts of federally created gaming.” While 95% of the 2,000-odd pending tribal requests to have land taken into trust are intended for non-gaming purposes, Schmit maintains that tribes frequently change their stated plans once the land is placed in trust.

In other words, Schmit is arguing that tribes don’t always live up to their promises when dealing with white folks. Given the small library of treaties that Indian tribes have signed in good faith but which North American governments have subsequently chosen to ignore when it suited their interests, we humbly suggest Cheryl consider the possibility that payback is indeed a bitch. 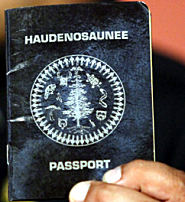 Speaking of ignoring past obligations, Akwesasne resident Joyce King was recently told by a Canadian border guard that her Iroquois (Haudenosaunee) Confederacy passport was a “fantasy document.” On June 18, King attempted to travel to Canada from Akwesasne, an island on the St. Lawrence River between Canada and the US, only to be denied entry and have her passport confiscated. Iroquois Confederacy passports have been accepted as official travel documents within North America and abroad for decades, but occasionally some over-officious border bozo decides to take a power trip (like last July, when an Iroquois lacrosse team was prevented from traveling to an international event under their Iroquois passports).

King intends to file a complaint with the border agency and the Canadian human rights commission. As she told QMI Agency, the border guard had done more than confiscate her travel document. “They try to take the Indian out of you. Confiscating my identity like that is pretty well an act of trying to suppress our identity.”