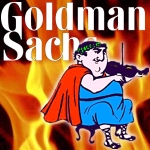 Thursday saw the release of the US government’s Financial Crisis Inquiry Commission (FCIC) report into the 2008 financial meltdown. It was never a secret that investment bankers Goldman Sachs received nearly $13b of the $182b in taxpayer funds spent to prop up floundering insurance firm American International Group (AIG). This $13b was meant to cover the policies Goldman had placed with AIG on behalf of its clients. However, the FCIC report reveals that Goldman received an extra $2.9b from the AIG bailout that went directly into Goldman’s pocket.

This directly contradicts statements made by Goldman execs at the time of the bailout, when they claimed that none of the AIG bailout money ended up riding on their hip. In reality, Goldman Sachs, the most profitable securities firm in US history and the company many finger as a chief architect of the 2008 financial death spiral, stuck their professionally manicured thumbs directly into taxpayers’ pies, plucked out a $2.9b plum, and said “What a good boy am I.”

For the record, that $2.9b is more than five times the $550m fine the Securities and Exchange Commission handed Goldman for their dealings that helped precipitate the crisis. In other words, taxpayers paid Goldman’s fine, and Goldman still came out $2.35b ahead on the deal. Perhaps the ‘plum’ analogy is not the right one – perhaps ‘Let them eat cake” would be more appropriate. Seriously, this is the kind of sociopathic disdain for the peasants/taxpayers that prompts revolutions. And – this just in – Americans own a lot of guns.

That said, the worst part of the FCIC report is the way it assigns blame across the board. Yes, securities firms were reckless, deceptive and criminally short-sighted, but policy makers, regulators and credit rating agencies didn’t rein them in, so whatcha gonna do? Also, those jealous peasants were lying about their credit records in order to buy houses. Bloody peasants… The net result of spreading responsibility around this way is that it becomes everybody’s fault – and thus no one is to blame.

To their credit, the FCIC has reportedly passed on the names of several figures from the world of high finance to state and federal authorities for possible criminal prosecution. Unfortunately, US Attorneys may be too busy going after online poker companies to be bothered with this kind of politically-charged case. (The FCIC’s Republican members — the type that usually rail against online gambling — released a minority report in which they sought to divert blame away from US companies and onto dastardly foreign governments for creating their own economic bubbles.) As New York law school professor Michael Perino put it, “The most likely outcome seems to be that this report gets put on a shelf to collect dust.”

So the outrage over Goldman’s larceny will pass the minute something else comes along (or is specifically engineered) to captivate the attention of the 24-hour cable news outlets. Come Monday morning, it will be back to business on Wall Street, but you still won’t be able to get a payout from your online poker account.