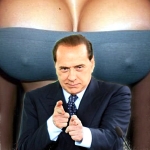 Italian prosecutors have accused Prime Minister Silvio Berlusconi of paying women – some of them allegedly underage at the time — for sex at a number of ‘bunga bunga’ parties the 74-year-old threw last year. Prosecutors have sent documents to the Italian parliament seeking permission to conduct a search of an accountant Berlusconi allegedly used to funnel cash payments to the women in question. 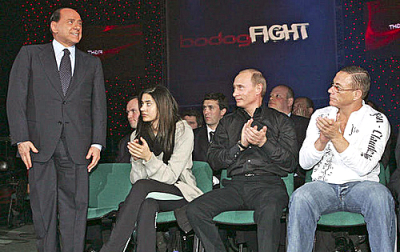 Some of the allegations stem from wiretaps placed on the phones of Berlusconi’s party guests. Transcripts reported in the Italian media have guests referring to Berlusconi’s residence as a “whore house” where those unable to snag an invite “can’t even imagine what goes on there … You are either ready for everything or you get a taxi and leave.” Hey… didn’t we arrive here in a limo?

One of Berlusconi’s house guests included Karima el-Mahroug aka Ruby Rubacuori, a Moroccan belly dancer who allegedly had paid sexual relations with Berlusconi when she was just 17. It has since been revealed that Rubacuori was arrested for theft last May, then released without charge, reportedly after a call from the Italian head of state. If this were the United States, the super hot Rubacuori would already have her own reality show, plus clothing and fragrance lines. The fact that she hasn’t yet cashed in may have something to do with Silvio being one of the 75 richest people in the world. Or not.

Most of the time, Berlusconi couldn’t give a shit what people say. His initial response to the allegations was to joke that “if occasionally I happen to look a beautiful girl in the face, it’s better to like beautiful girls than to be gay.” (He may be a politician, but political correctness is not a phrase in Silvio’s lexicon.) Silvio then went on one of his (many) TV channels and delivered a 10-minute rant about how he’d done “nothing that I have to be ashamed of” and accused prosecutors, magistrates and politicians for trying to “illegitimately destroy someone who has been elected by the citizens.” Like we said, this isn’t the US. Can you imagine Obama delivering an Oval Office address in which he invited Tea Party members to “kiss my Kenyan-born ass?” If only…

Calvin Ayre had a few drinks with Berlusconi and Vladmir Putin in St. Petersburg when the heads of state attended the Bodog Fight event between Fedor Emelianenko and Matt Lindland. For the record, Calvin claims not to have seen any naked women anywhere until he left the palace and arrived at the Bodog after party. Which is why Calvin will never seek elected office. As it stands, he can host ‘bunga bunga’ parties anytime he wants. Hell, he could have them beamed live around the world on a pay-per-view basis, if he so desired. Politicians can’t. At least, not yet. But Silvio Bungasconi looks like he’s sticking around a while, so who knows what the future may bring?

Silvio Berlusconi to the rescue of Italy’s gambling industry?
Steven Stradbrooke
29 May 2018
.