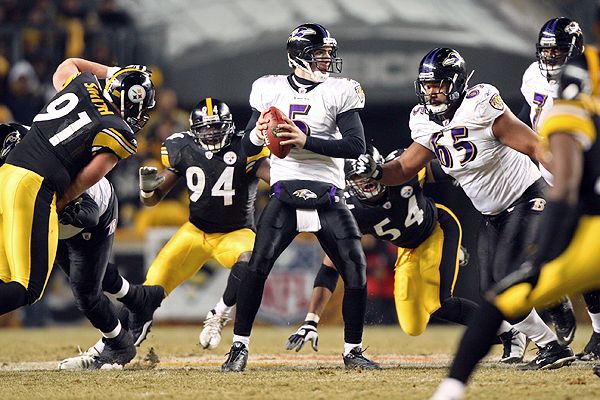 The first weekend of the NFL playoffs was wild. Three underdogs defied expectations and won their games straight up. The Packers topped the Eagles 21-16, the Jet’s used a last second field goal from Nick Folk to send the Colts packing (16-14) but no underdog win was more impressive than the 7-9 Seahawks upsetting the New Orleans Saints 41-36. The Baltimore Ravens were the only favorite to cover the spread, beating the Chiefs 30-7.

The NFL Divisional Playoff schedule is set with four compelling matchups and all four are rematches from the regular season.

The Ravens and Steelers are meeting for the third time this season with each winning a game by three points. So it’s fair that these two AFC North rivals have a chance to settle the score. The Steelers were enjoying their first round bye, letting injuries heal and preparing for the third tilt in this defensive battle. The line opened favoring the Steelers by -3.5-points and that half point could be huge when the game is over. In their last four meetings, each team has won twice by 3 points.

Aaron Rodgers won his first playoff game Sunday beating Michael Vick and the Eagles. Now he has a chance to advance to the NFC Championship game with a win over the Atlanta Falcons. The Falcons have been impressive at home, losing only twice at the Georgia Dome in Matt Ryan’s tenure as starting quarterback. The first meeting between these two squads ended on a last second field goal giving the Falcons a 20-17 victory. The big difference between Sunday’s game and their last meeting is the Packers have developed a running game, something they’ve sorely lacked since Ryan Grant went down in week one. The NFL odds makers have set the opening line favoring the Falcons by -1½-points.

The Seattle Seahawks made history by being the first team with a losing record to win an NFL playoff game. Now they’ll hope that luck continues as they face the NFC North Champions, the Chicago Bears. This will be the second meeting of the season for these to squads; the Seahawks won the first game 23-20. This didn’t change the odds makers opinions of the underdog Seahawks as they open as +10 point underdogs to the Bears. One thing’s for sure, the Bears won’t overlook the Seahawks like the Saints did.

Like the Steelers and the Ravens, the Jets and the Patriots are meeting for the third time this season. Unlike the Steelers and the Ravens, the Jets and Patriots games have been one-sided blowouts. The odds makers are expecting another blowout as they’ve set the opening line favoring the Patriots by -9 points. In some online sportsbooks, it’s already moved to -10 points. It seems high but it could be fair considering the Jets victory over the Pats came early in the season and the Pats victory over the Jets came later and by embarrassing fashion.

Last weekend’s NFL action was fun to watch but this weekend looks like it’s going to top it.