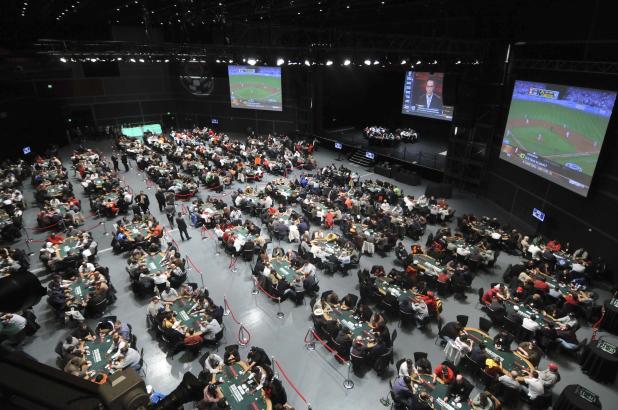 The World Series of Poker Circuit continues to grow exponentially in popularity everywhere it goes. There’s no greater example of this than in its latest stop in Hammond Indiana. The WSOP kick off event in Hammond attracted 1,611 players which officially made it the largest Circuit field ever assembled.

Where exactly is Hammond Indiana? Nobody knows, it should suffice to say its somewhere near cornfields, but that’s not stopping players like Brett Schwertley from making a killing. Schwertley kicked ass and took names at the Hammond event as he snatched up the $350 buy-in No Limit Hold’em tournament for a WSOP Circuit ring and pocketed a cool $77,000 for his efforts.

Hammond seems to be the place to set benchmarks for attendance. Prior to this year, the largest field on the WSOP Circuit numbered 1,412, set in last year’s opening tournament which was also in Hammond. In the WSOP release Jason Newman, Poker Room Manager for the Horseshoe Casino in the Indiana city, stated,

“I’m thrilled that we broke our own record that was set last year at Horseshoe Hammond. But I am not at all surprised since the Chicago poker scene is one of the strongest in the country. We’re absolutely ecstatic with the turnout so far and we expect huge fields in coming events over the next few weeks.”