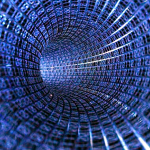 There was an interesting article in the New York Times over the weekend on how scientists are trying to reduce the bottleneck of digital traffic currently threatening future expansion of the internet. As a program manager at the Defense Advanced Research Projects Agency (DARPA) noted, the traffic requirements of the internet double every two years, and the infrastructure to handle all this bandwidth has not kept apace.

To buy themselves some time, scientists are developing methods of stuffing more data down the existing infrastructure, utilizing the complex characteristics of the light that travels down glass fiber optic cables. Though each fiber is no thicker than a human hair, alterations in phase and polarity will allow scientists to encode more information into each beam of light, which means more emails, more YouTube videos, more LOLcats, etc.

This is relevant to the online gaming industry in many ways, particularly if one accepts that we are all essentially operating in the larger digital entertainment realm – something I’ve been trying to get people to acknowledge for over a decade now. Most people probably aren’t aware of this, but physics was my best subject in school and I studied optics at university, so this is an area of particular interest to me.

It’s also of interest because, within the next year, Bodog Brand and my media company NudeFishMedia will start producing branded video content for TV and the web – similar to what I was doing with Bodog in the US market pre-2006 — but this time we are going to put a different spin on it. That’s all I’m prepared to say at this point, but suffice it to say, you ain’t seen nuthin’ yet.