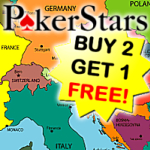 After receiving its activity license in August, PokerStars has been granted an operational license in the country of Estonia. Now, once they get their super-duper-pinky-swear-Masonic-handshake license, the new PokerStars.ee site will be able to serve the needs of all the Estonian poker players who were already playing on PokerStars before the company decided to act as an enabler in the ongoing Balkanization of Europe’s online gaming scene. In addition to the new .ee site, PokerStars has already collected .it and .fr domains – just three more countries and they get the next one free!