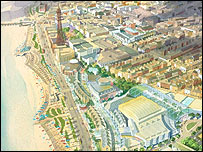 Gordon Brown might have put the kibosh on plans to build a SuperCasino in Blackpool but now that he’s out of the picture, hopes have resurfaced of the project rising from the ashes like a phoenix from the flames. This is because back in 2007 the Tories and the Lib Dems supported the project and now that they’re in high command they have the power to flick the switch. And let’s face it, if you’ve ever been to this depressing coastal town you’ll know it’s high time someone switched the lights on. They don’t call it Blackpool for nowt. Read more.