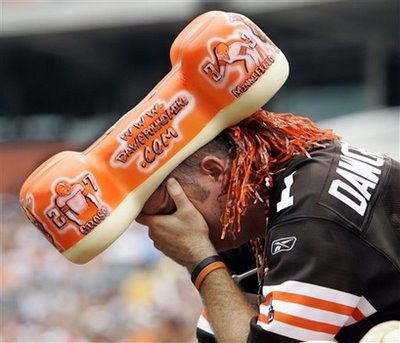 With the recent colossal collapse of the Cleveland Cavaliers in the playoffs, the city of Cleveland is a sad, bitter and lonely place, again. But shouldn’t residents of Cleveland be used to it? Cleveland is pretty much the poster child for futility in sport. It is a place home to some of the most crushing and legendary defeats in the history of sport. I’m surprised that the Quicken Loans building and every other arena and stadium in Cleveland doesn’t come equipped with tissue boxes in the seats so that fans can dry their tears after every game. Let’s run down the list of heartbreak and collapse in sport that Cleveland is best known for…

The Shot
Who can forget The Shot? It’s 1989, It’s the fifth and final game of the series between the Cleveland Cavaliers and the Chicago Bulls. It’s the final play of the game, Michael Jordan breaks free, catches the pass at the free throw line, raises up for the jumper, double clutches and lets it fly on Craig Ehlo…game, series, a legend is born. How many times will number 23 break the hearts of Cleveland fans? They’re gluttons for punishment, the list goes on.

The Drive
“We got em right where we want em”…Those were the sentiments of offensive guard Keith Bishop of the Denver Broncos in regards to the Cleveland Browns. The Broncos were down by a touchdown with only minutes to play on their own goaline. John Elway would lead them 98 yards to pay dirt on what is now known as The Drive. The upset for the Cleveland Browns would be completed when the Broncos kicked a field goal to win the game in overtime.

The Catch
Are you getting the picture yet? It seems every classic moment in sports has gone against some team from Cleveland. Game 1 of the 1954 World Series featured one of the classic plays in baseball. Willie Mays made a sensational over the head basket catch to save the lead for the New York Giants in eighth inning. The Giants would later go on to take Game 1 in the tenth inning and eventually win the series over the Cleveland Indians. The now San Francisco Giants haven’t won a World Series since.

The Fumble
It’s a year after The Drive and the Cleveland Browns are once again up against the Denver Broncos in the AFC Championship game. After being down 21-3 at halftime the Browns had stormed back into the game behind Bernie Kosar’s 4 touchdown passes. There’s 1:12 left to play, when Browns running back Earnest Byner broke free and appeared to be on his way to a game tying touchdown. Of course, it was not to be, before reaching the goaline, Byner was stripped of the ball by Broncos DB Jeremiah Castille and he fumbled at the 2 yard line. Denver would recover and go on to win the championship game.

World Series Game 7 Choke
Adding to the list of upset was the 1997 Cleveland Indians World Series team. They lost in Game 7 to the Wild Card team, the Florida Marlins. The heartbreak as usual, was epic. It was Game 7, the game was in extra innings, the Indians closer Jose Mesa is on the mound to close it out, and then heartbreak struck Cleveland yet again. Edgar Renteria stepped up to the plate and stroked walk-off, series ending, World Series winning, single off closer Jose Mesa to give the Marlins the crown. Indians shortstop Omar Vizquel called Jose Mesa a choker after the game, and the two have never been friends since. In fact, Mesa allegedly vowed to kill Vizquel. That’s 0-2 Mesa, Vizquel is still alive and well today.

So as you can see, heartbreak lives in Cleveland, they just never seem to catch a break. So don’t feel bad for them after this year’s disappointment in NBA playoffs and the possibility of Lebron James breaking their hearts if he leaves for greener pastures. They’re used to this type of thing.