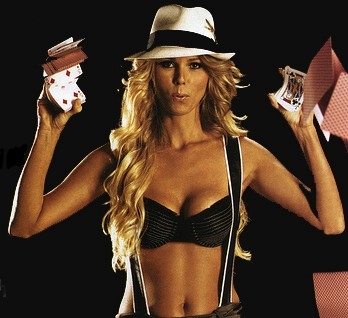 There once was a time when women were to be seen and not heard, spoke only when spoken to, and woe betide them if they ventured anywhere near a poker table, unless they were called Roxy and had been booked as the part of the break-time entertainment.

Nowadays things are very different indeed and not only are those sexist times a thing of poker’s past but the ladies are also holding their own – and if we’re talking about Joanna Krupa there that’s no bad thing – with the best of them.

Annie Duke, Vicky Coren and Annette Obrestad are just three of poker’s numerous female pioneers; players who have been kicking arse and earning big bucks at the baize for a number of years. Kathy Liebert, who has won no fewer than 13 poker tournaments, leads the way with over $5m in career earnings, while figures from the recent Caribbean PCA suggests that the sisters, who cashed at the same 14% rate as the men at the tournament, are clearly doing it for themselves.

Poker is still predominantly male-dominated, however. Women only constituted 2% of the field at the Caribbean PCA and if you think about it, a girl’s got to have considerable cojones to sit down with the big boys, stare them down and show them more than just a top pair. In many ways, they have to try that bit harder in order not to let the side down. Plus there’s the inescapable fact – stereotype permitting – that even if they are smarter than your average bear most would rather spend their weekend’s going shopping than sitting next to a bunch of fat gamblers with body odour.

Still, given that roughly half of the world’s population is female, it goes without saying that there is a vast untapped resource to be plumbed, so to speak, and the industry has already begun to respond by staging female only tournaments to coax new players of the wilderness.

PokerStars has bought into the notion by creating a new women’s only poker club, the Luxury Ladies Poker Club, that is offering the incentive of winning through to the tables of the €1,100 Ladies Championship, staged at one of Monte Carlo’s finest hotels, the Columbus Monaco. Clever. If poker alone doesn’t quite swing it – five days in glamorous Montecarlo might just tip the balance. The successful players will be awarded €700 in cash for travel expenses and participate in PokerStars pro Vanessa Rousso’s Ladies Boot Camp, a prize worth €300, as well as the Ladies event.

Rousso is one of a growing legion of hotties. After all, there are no rules to say that you can’t be smart and fit, which is why Bodog are looking to scout a new recruit to join their Pro Team. And they could do a lot worse than check out the stats of Kara Scott, Shannon Elizabeth and Clonie Gowen. I know I have…

On a more serious note, Rousso is a true groundbreaker for women. Third in the all-time female earners list the 27-year-old, she’s smart, rich and foxy. Unfortunately, she’s also married – but she can still teach you a trick or two about the spotting if your opponent’s bluffing or not. She’s got ‘the locked gaze’, ‘the freeze and ‘the tremor’ all down off pat. She’s even got theories on the ‘lean-back’ – and I’d certainly pay to see that.