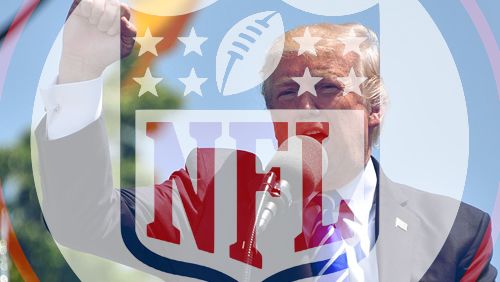 American Football has always been played out not only physically on the football field, but there has often been a sociopolitical backdrop to the sport too. Never has that been more in focus than right now, with the Black Lives Matter discourse acting as a warm-up to the season proper.

The NFL, of course, released a statement just two days ago that was loaded with contrition about how they have handled previous controversies – including the Colin Kaepernick situation – and have vowed to improve in the future.

We, the NFL, condemn racism and the systematic oppression of Black People. We, the NFL, admit we were wrong for not listening to NFL players earlier and encourage all to speak out and peacefully protest. We, the NFL, believe Black Lives Matter. #InspireChange pic.twitter.com/ENWQP8A0sv

Wading into the debate, President Donald Trump has possibly stoked the fire even more by seeming to criticize Roger Goodell’s apparent humility.

“Could it be even remotely possible that in Roger Goodell’s rather interesting statement of peace and reconciliation, he was intimating that it would now be O.K. for the players to KNEEL, or not to stand, for the National Anthem, thereby disrespecting our Country & our Flag?” said Trump in his controversial social media post.

Ignoring the grammatical errors, Trump’s comments are flagrant at the very least. It’s not helping his popularity, either. Trump has lengthened in the sportsbetting markets to extend his Presidency to eight years from four. The current Commander-in-Chief is currently Evens to make it back into the White House when the elections take place in November, with Joe Biden 10/11 (-110).

With that in mind and with Biden taking the predictable opposite stance to Trump stoicism in the face of practically global pressure to solve the racial tensions happening in the country he presides over, the backdrop to the 2020 NFL season is one of tension where six months earlier, excitement was the only feeling there.

Many of the NFL’s best football players, both in historic and present-day terms, are black or minority ethnic (BAME) and with the Black Lives Matter protests and online campaign striking a chord with a huge percentage of the league.

Trump’s remarks about players kneeling flies in the face not only of public opinion, but of the movement itself. Colin Kaepernick’s ‘take the knee’ stance struck a chord not only with black players and fans, but sports fans in general.

The latest odds for the season are perhaps the one factor that hasn’t changed in the last few weeks, with the Kansas City Chiefs (13/2) slight favourites over the Baltimore Ravens (7/1), with the San Francisco 49ers at 10/1 and Tampa Bay Buccaneers at 14/1 just behind them.

Should the NFL 2020 season go ahead as planned, it may well be the kind of season that defines a period of history, not only the season it takes place in, but the era in which 2020 will be remembered.

The Black Lives Matter movement, along with the Trump-Biden rivalry and a global COVID-19 pandemic, are three explosive factors that could influence the NFL both on and off the pitch in the coming season.