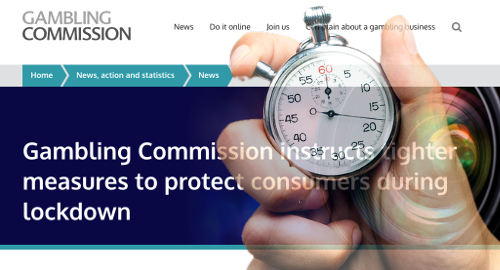 UK-licensed online gambling operators have been given new marching orders from their regulator regarding how they operate in our current pandemic purgatory.

On Tuesday, the UK Gambling Commission (UKGC) issued new guidance for its online gambling licensees, featuring “tighter measures to protect consumers during lockdown.” The UKGC also published data that purports to show “the impact that COVID-19 is having on consumers and the industry so far.”

The UKGC clearly wants to have it both ways, as they claim that, while “there is no evidence to suggest an increase in problem gambling,” the closure of land-based gambling venues and the cancellation of major sports has increased consumers’ use of online casino, poker and virtual sports products, which could leave some gamblers “at greater risk of harm during lockdown.”

As such, the UKGC says operators must now prevent reverse withdrawal options – in which an operator grants a customer’s request to reverse an in-process withdrawal, which the UKGC calls “a flag for potential gambling harms” – until further notice.

Operators must also refrain from offering bonuses or promotions to customers displaying ‘indicators of harm,’ and must interact with customers whose game play exceeds one hour in any single session. ‘Continual monitoring’ of customers is required to ensure activity patterns haven’t changed in recent weeks.

Operators must review thresholds and triggers for new customers until their play and spend patterns are known, while conducting affordability assessments and either limiting or suspending further play until those checks have been concluded.

The UKGC wants operators to incorporate these changes “as soon as possible,” and the regulator says it will launch a consultation later this month on whether or not these temporary measures should become permanent.

UK Minister for Sports, Tourism and Heritage Nigel Huddleston welcomed the UKGC’s new requirements, saying the government would “continue to monitor the situation closely and will not hesitate to take further action if required.”

DODGY DATA
As we said, the UKGC survey of gambling activity in March – which saw most retail gambling options shuttered mid-month – isn’t necessarily the strongest argument for imposing tighter rules. For example, those reverse withdrawal requests? The number of requests fell 7% from March 2019 and the number of customers making those requests fell 10%.

The UKGC noted that 64% of ‘engaged gamblers’ had increased their time or money outlay in March, although just 8% of gamblers earned this ‘engaged’ designation (defined as gambling on three or more products).

The average online gambling session in March 2020 was 22 minutes, four minutes less than in March 2019. The number of sessions that stretched longer than one hour rose 23%, but given that poker – which proceeds at a far more leisurely pace than slots or other casino games – has seen a 53% rise in players, an increase in sessions longer than one hour seems a natural progression.

National Lottery draw tickets were the unquestioned winner in terms of attracting newbies in March but the UKGC lumped both online and offline sales in this category, so we’ll disregard them for the rest of this article.

Of those who tried certain online gambling products for the first time, the biggest gainer was virtual sports (4.9%), while second place went to National Lottery online instant win games (2%), leaving online slots third with 1.7%, followed by sports betting (1.6%) and eSports (1.4%).

Around 15% of respondents reported seeing online slots marketing efforts in March, although this was dwarfed by online bingo (27.8%) promos. Other casino games notched a 14.5% score, while National Lottery online instant win games scored 10.3%.