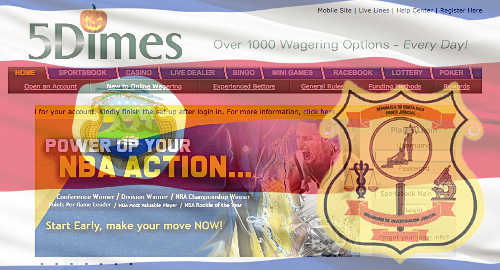 The owner of online sportsbook 5Dimes has reportedly been found dead in Costa Rica after an apparent kidnapping late last month.

On Saturday, the Costa Rica Star reported that the Judiciary Investigative Police (OIJ) had recovered the body of 43-year-old William Sean Creighton, known throughout the online gambling industry as ‘Tony’. The OIJ has yet to publicly confirm the report.

Last week, the OIJ announced that Creighton’s wife had reported his disappearance on September 25, after he failed to arrive home after departing his office the previous evening. The OIJ claimed to have no evidence for the reason behind his disappearance, but local media reported that Creighton’s wife had received a phone call from his kidnappers just hours after he went missing.

Creighton’s wife reportedly transferred anywhere from US$750k-$1m in cryptocurrency to his alleged kidnappers after speaking to Creighton on the phone, but this ransom wasn’t followed by Creighton’s release. His car was found crashed into the gate of a rural property, but Creighton’s whereabouts remained unknown until the OIJ announced the finding of his body Saturday.

News of Creighton’s disappearance prompted rampant speculation in online forums regarding 5Dimes’ future, which in turn prompted the book’s management to issue a statement last week reassuring customers that “the fundamentals of 5Dimes Group operating model remain unchanged.” 5Dimes has yet to issue a public response to the report of Creighton’s death.

Creighton had a well-earned reputation for being extremely blunt in his communications with 5Dimes customers, but the book had been an online betting mainstay for two decades and there appears little reason to assume that the business won’t carry on as usual despite Creighton’s death.

Costa Rica was once the primary hub of the online sports betting industry, and reports of violent crime weren’t uncommon in those early ‘wild west’ days. Local media has reported a recent rise in abductions of foreign nationals, including US and Chinese ex-pats, suggesting that industry members who continue to operate in the region may need to take extra precautions to ensure their safety.