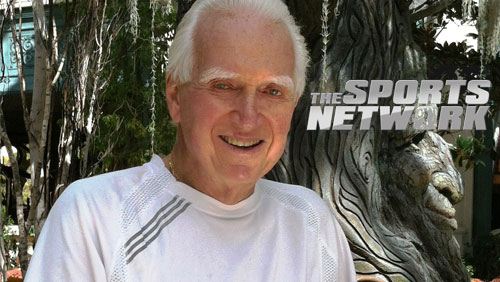 Philadelphia, PA (The Sports Network) – “He is, for as long as anyone can remember, and by his own admission, “A boy from The Bronx with pinstripes on my backside.”  Over the years, while his persona, stature and global presence grew, he always said that was who he was and he never changed much,” said Phil Sokol, Director of Operations at The Sports Network.

“Given what he has done for sports, and the FCS in particular,” he added, “this is a long overdue step to honor Mickey and recognize his contributions to the FCS and sports in general.”

Craig Haley, FCS Executive Director at TSN, continued, “Mickey Charles was an outstanding student in school, with a level of learning and IQ that put him in what was then the “SP” (Special Progress) classes, onto high school where he captained the basketball team to a championship Borough game and graduation at the age of 15.  Then Columbia University, studies and basketball for two years but it was, as he tells it, too big for me.  Mickey opted for a smaller school, Kalamazoo College, Division Three, on a par with the Ivy League scholastically, captain of the basketball team once again, Conference (MIAA) championship and his B.A. degree.

“From there to Brooklyn Law School and his L.L.B.  No team to captain then other than legal debating!  Mickey has had a storied career and, when you ask  him, “I have had my 15 minutes of fame, probably well over 100 times, and expect a few more.  No regrets…certainly none I am going to share.”

Charles’ background includes a wide range of interests, accomplishments and realizations, among which are newspaper syndication, hosting a national sports talk show for CBS, another on ESPN, being a feature editor discussing and writing about a myriad of topics running the gamut from telecommunications to travel, responding to requests as panelist, moderator and chair-person at seminars, conventions, trade shows and conferences…and still being President and CEO of Computer Information Network, Inc., known within the industry and world-wide as The Sports Network.

As Phil Sokol tells it, “He has been referred to, justifiably so, as a legend, icon, standard for the industry, none of which is inappropriate and has had a storied career that is well-deserved.  He will be honored at the Awards he has created with a legacy of his own this year.  His peers and employees are honoring him with The Mickey Charles Award for academic achievement by an outstanding student/athlete within the FCS, recognition that will join the others he created … The Walter Payton Award, Eddie Robinson Trophy, Buck Buchanan and Jerry Rice Awards for college football’s FCS Division (formerly IAA) with The Payton being the most prestigious and sought after award in college football, second to only the Heisman.  More information can be found at  FCS28 “

He is also a consultant to major corporations domestically and internationally and was asked to speak and present before the Presidential appointed National Gambling Impact Study Commission due to his expertise in this area.

Charles is a pioneer in the audiotex industry since pre-divestiture, when he formed Communications Team, Inc., a sports telecommunications group focused on telephonic delivered information that eventually evolved into The Sports Network, an international real-time sports wire service with customers throughout North America, Asia and Europe.

Turning to one of his recreational favorites, he has been president of the Middle Atlantic Blind Golfers Association, assisted annually for many years with golf tournaments for the benefit of United Way and St. Jude’s and was a Professor of English and Marketing at St. Joseph’s University in Philadelphia.

About The Sports Network