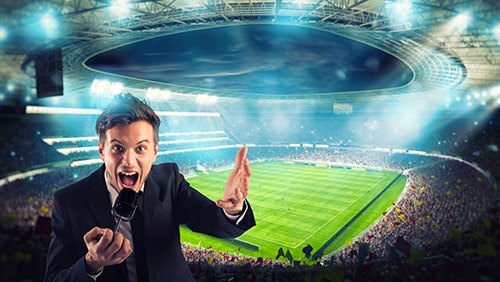 Sky Bet’s latest sports gambling market has come crashing to the ground without a parachute. The gambling operator had recently introduced “Commentator Bingo” as a way to branch out into other gambling avenues, but it turned out to be a complete dud. The company, per a report by SBC News, has announced that it has shelved the idea after receiving a serious amount of backlash, pulling it just ahead of this Sunday’s English Premier League game between rivals Manchester United and Liverpool.

Commentator Bingo was presented as a way for gamblers to place bets on “exact words and phrases” that commentators might use during the game. Sky Sports is broadcasting the game, with Martin Tyler, Gary Neville and Jamie Carragher set to provide the commentator, and Twitter apparently exploded with criticism over the concept. However, some of the backlash may have been misdirected, as it’s possible that some Twitter uses erroneously linked Sky Bet with Sky Sports, even though they’re two separate and independent companies.

Sky Bet was probably more concerned about the high-profile criticism it received for Commentator Bingo than it was over the reaction of Twitter users. Carolyn Harris, a U.K. Member of Parliament and the chair of the Gambling Related Harm All Party Parliamentary Group, was not impressed with the activity and told The Athletic that it was “astounding, unbelievable and predatory.” She added, “Where are the limits? What are the boundaries on what these companies are going to take a bet on? I am aghast that they try to find a betting opportunity in every minute of the day.”

Possibly unaware of how the new gambling option would be taken, Sky Bet has most likely just reignited anti-gambling flames in the U.K. The country has already been cracking down on how gambling operators manage their activity and a number of new policies have been introduced over the past two years that limit revenue-generating possibilities. Offering options such as Commentator Bingo are not against U.K.’s gambling laws; however, operators should now expect that to change in the very near future.

It’s very likely that the U.K. will introduce changes that will severely restrict what gambling operators can offer. Markets such as player transfers have been seen, but, thanks to Kieran Trippier, the market is coming under fire. Trippier was found to have “encouraged” some of his circle to place bets on his transfer to Atletico Madrid two years ago, and this has caused an uproar. He was suspended for ten weeks because of it last year, and Atletico Madrid lost when it tried to appeal that decision.

As a result of Trippier’s actions, a push to clamp down on novelty sports market gambling has begun. The U.K. Gambling Commission (UKGC), already looking at ways to more closely regulate the gambling industry, hasn’t indicated whether or not it will push for more restrictions, but operators should begin preparing now, just in case the UKGC cracks the whip.