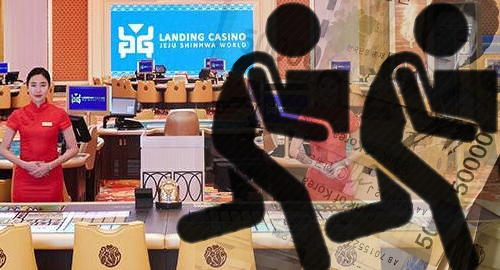 The casino cash stolen over the holidays from South Korean operator Landing International Development was the work of more than just a single employee, according to local police.

Earlier this week, the Hong Kong-listed Landing confessed to investors that an employee had apparently made off with over KRW14.5b (US$13.4m) in cash from Jeju Shinhwa World, the company’s gaming venue on South Korea’s Jeju Island.

The Yonhap news agency reported Thursday that Landing had asked police to track down a female Malaysian employee the company suspects of being behind the heist. The unidentified staffer apparently didn’t return to her post after the holidays and her whereabouts are currently a mystery.

The staffer apparently wiped the casino’s security footage before she fled the scene, leaving police without any hard proof of her involvement in the theft. But police are working on the theory that she had at least two accomplices, both of whom presumably possess strong backs.

The stolen cash reportedly consisted entirely of KRW50k ($46) notes, which would mean several hundred thousand individual bills with a combined weight of over 280kg (616lb). The Korea Herald helpfully noted that this weight was “about the same as a full-grown Siberian tiger.”

The police estimated it would take 12 wooden apple boxes to cart this sum, and the hope is that the perpetrators didn’t decide to split up this loot, as cargo that bulky would help border guards spot them trying to leave the country.

As if Landing didn’t have enough to deal with, what with the pandemic putting a severe brake on international tourism (all but one of South Korea’s casinos are off-limits to local residents). Plus there’s the little matter of Landing’s chairman Yang Zhihui having been forced to step down from the board of an unrelated Chinese company due to a probe into alleged market manipulation of the company’s stock.

Yang resigned from the China Dive Company Ltd board in mid-December and Landing assured investors at the time that the China probe was unrelated to Landing’s operations. Yang, who holds a 42% stake in Landing, disappeared without a trace in August 2018, resurfacing three months later claiming to have been assisting Chinese authorities with a corruption probe.