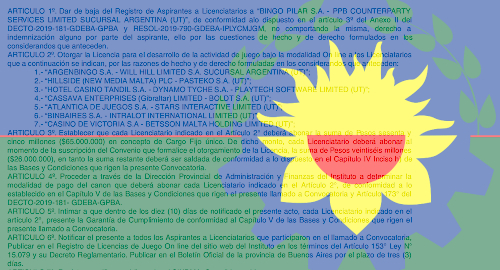 On New Year’s Eve, the Official Gazette of the province of Buenos Aires published the names of the seven companies granted permission to offer online gambling within its borders. The province opened its licensing derby nearly two years ago and received 19 applications from interested parties, which were then whittled down to 14 finalists.

The new licensees (along with their local partners) are 888 Holdings, Bet365, Betsson, Intralot, Playtech, The Stars Group (Flutter Entertainment) and William Hill. The partnerships require the local operator to hold a minimum 15% stake in the business.

Companies not making the grade included Latin American online betting stalwarts Betcris, Betway, Italy’s Sisal and Spanish operators Codere and Luckia. No reasons were provided for why these companies didn’t make the cut. Betsson originally ranked eighth in its application vetting, but was elevated to seventh after Flutter withdrew the application for its Paddy Power Betfair unit following Flutter’s takeover of The Stars Group.

It’s unclear when Buenos Aires’ online licensees might commence their operations but license recipients must make an immediate payment of US$310k toward a ‘single fixed charge’ of $770k. Buenos Aires originally planned to tax its online licensees at a rate of 25% of gross gaming revenue but federal politicians approved a plan last November to tax online gambling at a rate of up to 5% of turnover.

The Buenos Aires licenses allow for a full-spectrum online product offering (casino, sports, virtual sports, lotteries, etc.) although political prop wagers are out of bounds. The Provincial Directorate of Administration and Finance of the Provincial Institute of Lottery and Casinos (IPLyC) will have oversight of online operations.

Buenos Aires has a population of around 16m, slightly more than one-third of Argentina’s total headcount, making it a highly desirable jurisdiction in which to plant a LatAm flag. However, the Autonomous City of Buenos Aires (population 3m) has its own online licensing regime in the works.