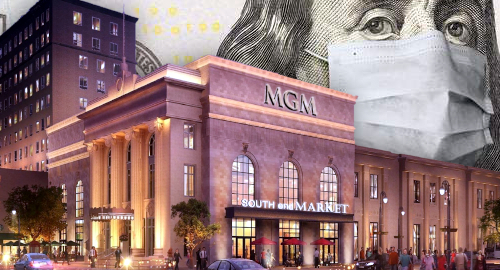 Massachusetts’ three casinos took it on the chin in November as re-imposed pandemic restrictions kept gamblers – and revenue – at bay.

MGM Resorts’ MGM Springfield generated a mere $10.5m, barely half its November 2019 total and a $7m decline from October. November’s tally was also $200k lower than July 2020, a month in which the property was open for less than three weeks following COVID-19’s initial shutdown.

MGM Springfield is currently operating on a reduced timetable, welcoming guests only from 8am to 9:30pm, with few non-gaming amenities available. Like Wynn Resorts’ Encore Boston Harbor, blackjack tables are currently restricted to three players each, while play at all other tables is currently suspended.

Compared to MGM’s plight, Wynn got off comparatively easy. Encore brought in $27.3m in November, down 43.6% year-on-year and 33.5% from October, with the pain spread equally across slots and tables.

Penn National Gaming’s slots-only Plainridge Park Casino earned $7.6m in November, about $3.5m less than October. Like the other licensees, Plainridge’s guest capacity is currently limited to three times its number of available gaming positions, with the caveat that slots players must be separated by at least six feet of space or walled off from each other by plexiglass dividers no less than 5’10” tall.

Obviously, now would be a great time for Massachusetts’ casinos to be offering mobile sports betting and/or online casino products to customers, but the state Senate rejected attempts to add legal wagering to its fiscal 2021 budget proposal last month.