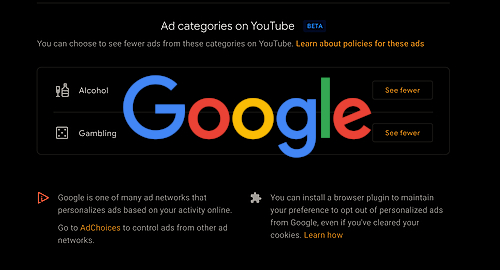 Google’s gambling policies are being tweaked to allow users greater opportunity to block gambling ads from invading their digital domain.

On Thursday, Google announced that it will allow users to adjust their personal Ad Settings to limit being exposed to ads involving ‘sensitive categories’ such as gambling and alcohol. The opportunity will initially be offered to US users of Google’s YouTube video platform, with the changes hitting the wider Google product line and other countries in “early 2021.”

Google VP Debbie Weinstein said the policy was the result of ‘feedback’ from users who “would prefer to limit ads in certain categories.” Some of this feedback resulted from users who clicked on Google feature controls such as ‘Stop seeing this ad’ and ‘About this ad.’

Users will have to proactively opt out of seeing gambling ads and Weinstein cautioned that Google users who tick that box will see “fewer” gambling promos rather than a complete blackout. Visiting certain sites and clicking on certain articles may still result in users being exposed to contextual ads for unwanted/forbidden fruit.

The setting is also reversible for users who suddenly feel their lives empty and without meaning without a regular dose of betting and hooch come-ons. Google worked with an international responsible drinking group on the blocking policy, while choosing to include gambling “as an additional option.”

The new options won’t be available to Google users in countries that already prohibit gambling and alcohol ads. Italy recently issued a €100k penalty against Google for exposing local residents to a French online casino affiliate site’s promos in violation of the gambling ad prohibition in Italy’s so-called ‘dignity decree.’

The new options don’t reflect any other change in Google’s existing policies regarding gambling advertising, which have been trending in a more liberal direction in some markets undergoing gambling expansion, including the US.

Google’s longstanding anti-gambling policy began to crumble in mid-2017, when real-money gambling apps were finally allowed into the Google Play marketplace in a handful of markets where such activity was legal.