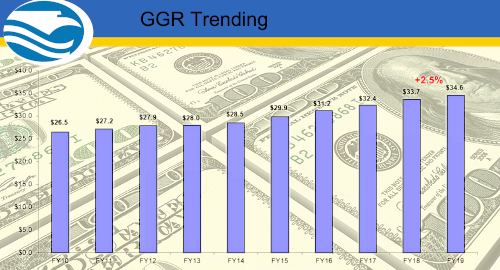 Figures released Tuesday by the National Indian Gaming Commission (NIGC) show the country’s 245 federally recognized tribal gaming operators reported casino gaming revenue of $34.58b in fiscal 2019, up 2.5% from 2018’s $33.72b. There were 522 tribal-controlled casinos at the end of FY19, up from 501 at the end of FY18.

The Sacramento region – which encompasses 76 casinos in California and Northern Nevada – earned FY19’s revenue crown with just under $9.7b, up 4.3% from FY18. Runner-up Washington, DC – with 42 casinos across Alabama, Connecticut, Florida, Louisiana, Mississippi, North Carolina and New York – saw its FY19 revenue fall 2% to just under $7.4b.

The largest regional gain was in Oklahoma City – spanning Western Oklahoma and Texas – where the 73 casinos reported revenue up 7.7% to $2.67b. Oklahoma’s tribes went to war with their governor this year over his attempts to collect more revenue for the state by signing gaming compacts with individual tribes rather than collectively bargain with all tribes, a fight in which the tribes ultimately prevailed in federal court.

However, Simermeyer warned that the FY20 figures will be laid low by COVID-19, as the pandemic forced the temporary closure of all tribal casinos, many of which remain closed or restricted to operating at a fraction of their normal capacity. Despite these limitations, Simermeyer praised tribes for their “dedication to a safe and sustainable Indian gaming industry.”