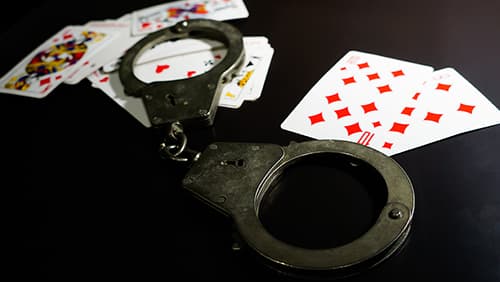 The Shilin District Prosecutors office have revealed their indictments against 2 Japanese and 11 Taiwanese nationals following a July raid of office linked to Gamatron and Ganapati. The group are accused of running an illicit online gambling business.

The Japanese nationals include a man identified as Kinoshita and a woman known as Matsumura. They are accused of developing gambling apps and profiting from betting operations, along with the 11 Taiwanese. The indictment specifically cites the Japanese nationals as running three companies: Ganapati Taiwan Co., Ltd., Ganapati PLC and another technology company.

The charges cite 36 gambling apps were developed by the group, servicing 28 websites. All together, they made profits off of NT$1.4 billion ($48.9 million) in wagers. In their defense, Kinoshita and Matsumura have argued that they blacklisted Taiwanese, Japanese nationals, but prosecutors still allege they broke Taiwanese law.

This indictment further solidifies theories that Ganapati hasn’t been entirely honest about it’s operations. The July raid notably took place at a Gamatron office. Ganapati CEO Juliet Adelstein has refused to define the exact nature of the link between her company and Gamatron, but Taiwan’s indictment indicating the group worked for Ganapati seems to at least contradict the CEO’s statements.

The Kinoshita named is very likely to be Hayato Kinoshita, a man our sources have said runs both companies. Adelstein has noted that her own promotion to chief executive allowed Kinoshita to move on to other ventures, but this indictment also contradicts that statement.

These allegations from Taiwanese prosecutors could always fall apart under the scrutiny of a court room, but the mounting evidence would suggest that the relationship between Gamatron and Ganapati, and the crimes alleged against Kinoshita’s group, have more merit than people like Adelstein would allow. After Ganapati’s Estonian offices shut down, allegedly due to Covid-19 and not the company’s money problems, employees told local news outlets that they worked equally on Ganapati and Gamatron games, and flat out said Ganapati’s statements were lies.