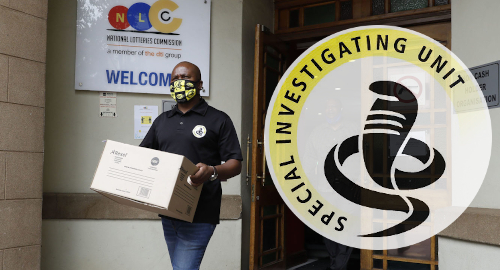 On Tuesday, the Pretoria offices of South Africa’s National Lottery Commission (NLC) were raided by members of the Special Investigating Unit (SIU), the government’s top body for investigating serious financial malpractice in the administration of the state.

Local media reported that SIU agents – along with members of the Hawks serious crime investigation force – came bearing warrants from a Pretoria magistrate allowing them to seize documents, laptops and other NLC records.

The agents also paid a visit to document storage company Metrofile, marching out with still more evidence, while sources claim the warrant also covers the home residences of some NLC officials and their relatives.

The raids came one month after South Africa’s Government Gazette published an order signed by President Cyril Ramaphosa authorizing the SIU to investigate alleged malfeasance at the NLC. The notice said the sketchy activities in question date as far back as January 2014, and possibly even longer.

Ramaphosa’s order came following the release of an investigative report by the minister of Trade & Industry that identified numerous suspicious financial transactions totaling hundreds of millions of rand, including a R5.5m (US$367k) grant to a non-profit youth organization that never actually made it to its stated recipient.

The report put pressure on NLC chair Alfred Nevhutanda to resign but he refused, despite having already exceeded his statutory maximum two five-year terms by one year. The government finally began publicly advertising for his replacement to assume the role as of December 1.

Phillemon Letwaba, the NLC’s chief operating officer, was put on ‘special leave’ in March after his name was linked to some of the projects that received a total of R60m in NLC grants. These projects, including the construction of an old folks home in the Northern Cape region, were reportedly never seen through to completion.

The allegations surrounding the NLC didn’t help dispel public suspicions of a fix when last week’s PowerBall lottery draw resulted in the numbers 5-6-7-8-9-10 being drawn in sequence on live TV. The NLC insisted it was a rare but “not impossible” coincidence but once the seeds of suspicion have been sown, conspiracy theories grow like weeds.