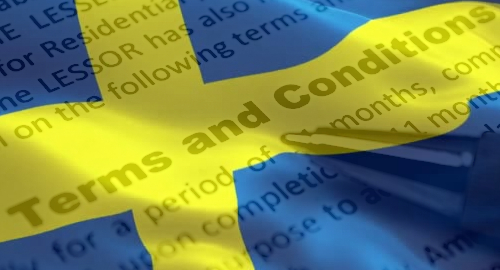 Sweden’s online gambling operators have ‘deficiencies’ in the terms of service they impose on their gambling customers, according to the country’s consumer ombudsman.

The Swedish Consumer Agency (Konsumentverket) recently identified “a number of shortcomings” following a review of the T&C’s maintained by 13 Swedish-licensed online gambling operators. The watchdog concluded there was “significant room for improvement” in the T&C’s, some of which contain terms that “can be considered unreasonable.”

It’s worth noting that several of the above companies have previously been subject to warnings and/or financial penalties from the Spelinspektionen regulatory body for violations of rules regarding bonus offers, betting on matches involving players under 18 years of age and failure to comply with the Spelpaus self-exclusion registry.

Six of the 13 licensees applied restrictions to customers making withdrawals from their accounts, including caps on how much can be withdrawn per week. But some operators can refuse to process a withdrawal if a customer has violated any provision of the terms, despite the fact that “it is not clear in which situations the company has the right to refuse withdrawals.”

Konsumentverket said an operator that conducts proper due diligence when registering customers and accepting deposits shouldn’t require additional documentation to process a withdrawal. Making such a request “can be interpreted as the gaming companies making it more difficult or delaying the consumer’s right to withdraw his winnings.”

Konsumentverket further notes that conditions that are “unclear and unclearly formulated” can be considered unreasonable “because the consumer finds it difficult to know what possible consequences the condition may have.”

Konsumentverket also found fault with some operators’ declaring that the laws of the jurisdiction in which the operator is based would apply to the application of their T&C’s and any consumer dispute would be handled by a court in that jurisdiction. The watchdog noted that this flies in the face of European Union rules that require consumer disputes to be resolved in “the country in which the consumer has his habitual residence.”

Konsumentverket said Swedish licensees should provide information regarding both ARN and ODR, as referrals solely to foreign ADR bodies “are not sufficient.” Providing no ADR info whatsoever “is contrary to law.”

The review also took issue with the restrictions some operators put on customers filing complaints, including requiring written communications, reserving the right not to proceed with a complaint if certain information isn’t submitted, and limiting the window of time in which complaints can be made.

Konsumentverket found similar fault with operators reserving the right to alter T&C’s without offering valid reasons behind such changes. In many cases, operators alleviated themselves of the requirement to inform customers of changes to their T&C’s unless said changes were ‘significant’ while some operators saw no reason to alert customers regardless of the significance of the changes.

Konsumentverket has submitted its findings to all Swedish operators, as well as their industry umbrella groups. The watchdog promised to follow up the review to see whether operators have upped their games, with unspecified terrors awaiting operators who fail to heed this warning.