Home / Business / Cyprus online bookies making out like bandits, retail not so much 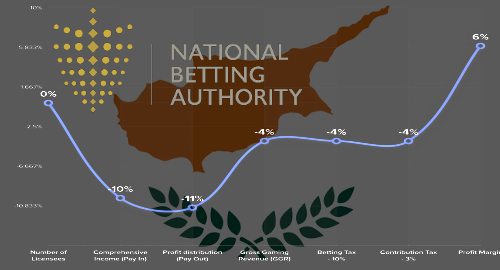 The revenue gain was entirely due to the country’s nine ‘Class B’ online bookmakers, which reported their take rising an impressive 47% to €10.8m, despite online betting handle falling 11% year-on-year to €105.65m.

In stark contrast stood the NBA’s six ‘Class A’ retail bookmakers, which reported Q3 handle falling 10% to €65.14m and revenue down 4% to slightly over €14m. Like most retail operations, the NBA’s land-based betting operators were required to shut down for a time this spring due to COVID-19, but their operations were open for the full Q3.

That’s not to say that the pandemic had no impact on retail operations in Q3. The NBA reported that there were 507 betting shops at the end of the quarter, around 8% fewer than at the same point last year. Fortunately, the number of shop staff declined only 2% to 1,256.

The NBA recently issued revised guidelines for retail betting operations as the pandemic’s second wave took hold. Shops must now close at 7pm each day, betting terminals are to be shut off and only three bettors at a time are allowed inside to queue for the cash counter.

Still, the NBA appears unimpressed with this ever-increasing sum, as last month it announced an open tender for “upgrading of the web-blocking process and the application of new methods of ensuring legality.” The €20k tender closed on November 18.