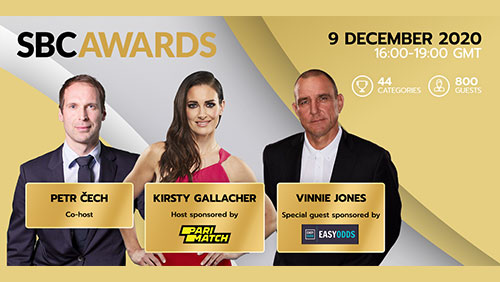 Goalkeeping legend Petr Cech and sports broadcaster Kirsty Gallacher have been confirmed as the hosts of the SBC Awards 2020 on 9 December, while Premier League footballer turned Hollywood star Vinnie Jones is set to make a special guest appearance.

This year’s prestigious betting and gaming industry awards will be broadcast live from Chelsea FC’s Stamford Bridge home, with an audience of 800 guests joining the virtual ceremony from around the world.

The SBC Awards recognise excellence among sports betting and igaming operators, affiliates and suppliers, and the evening will see 44 honours handed out to the industry’s top performers.

In conjunction with official charity partner GVC, the event will also raise money for Harefield Hospital, one of the world’s largest and most experienced centres for heart and lung transplants.

As always, the SBC Awards have received outstanding support from the industry and the headline sponsors of the virtual ceremony include BetConstruct, Golden Race, Neosurf, Betinvest, and Metric Gaming.

Cech is a fitting choice of host for an event staged at Stamford Bridge that will highlight success, having been a vital figure in the most successful era in Chelsea’s history.

After spells with Chmel Blšany, Sparta Prague and Rennes, Cech joined Chelsea in a £7million transfer in 2004. It proved to be superb value for the Blues, as he went on to produce a match-winning display in the 2012 Champions League final, as well as helping the club to secure four Premier League titles, four FA Cups, three League Cups and the Europa League.

He’ll be joined on stage by Gallacher, whose appearance is sponsored by Parimatch. One of the most recognisable faces in sports broadcasting following a 20-year spell as a Sky Sports presenter, Gallacher returns to host the SBC Awards for a third time.

Also appearing on stage, and certain to make a memorable contribution to the evening, is special guest Jones. He is no stranger to Stamford Bridge having played for Chelsea during a career as a combative midfielder that also included spells with Wimbledon, Leeds United, Sheffield United and QPR. He was part of Wimbledon’s famous ‘Crazy Gang’ team that shocked Liverpool to win the FA Cup in 1988, and also captained the Wales national team.

After hanging up his boots, Jones landed the role of Big Chris in the 1998 Guy Ritchie film ‘Lock, Stock and Two Smoking Barrels’. He has since forged a successful acting career and appeared in hits such as ‘Snatch’, ‘Gone in 60 Seconds’, ‘Swordfish’, ‘Mean Machine’ and ‘X-Men: The Last Stand’. Jones now combines television and film work with writing the ‘By The Balls’ betting tips column for EasyOdds.com.

Rasmus Sojmark, CEO of SBC, said: “The SBC Awards are always a fantastic night, as we celebrate the best of the best in the betting and gaming industry. This year’s event will be very different to previous editions, but I can promise all of our guests that the virtual show will be an entertaining affair.

“Having Petr Cech and Kirsty Gallacher hosting the ceremony, and Vinnie Jones joining them on stage, is sure to make it an unforgettable night to round off what has been the most unusual of years for both the industry and SBC.”

The shortlists for all 44 categories can be viewed on the SBC Awards website.

To book a virtual table for the SBC Awards 2020 or for information about the final remaining sponsorship opportunities, please contact [email protected].