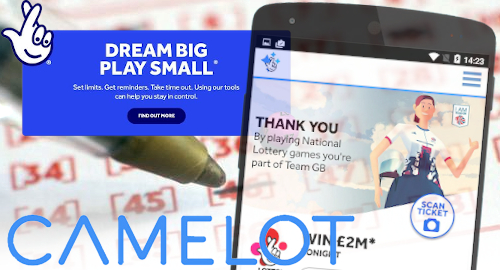 UK National Lottery operator Camelot posted near-record sales in the first half of its fiscal year despite retail disruptions caused by COVID-19.

The H1 stats were saved from a much greater decline by Camelot’s “urgent interventions” as the UK government’s pandemic response forced many lottery retailers to shut their doors. Camelot campaigned hard to remind players that digital options abounded while adding additional technical support to onboard newbies, resulting in 1.3m new online registrations.

That customer surge led to record digital sales of £1.62b, an increase of £455m from the same period last year, with mobile’s share of that sum gaining £380m to a record £1.13b. Camelot lowered the minimum deposit threshold to encourage digital virgins, while simultaneously pushing a ‘Dream Big, Play Small’ message that the company said resulted in digital average weekly spend “remaining consistent” over H1.

Digital’s gain was retail’s loss, as land-based sales fell by £522.4m to £2.23b. However, Camelot claims sales rose 15.2% from its first quarter to the second, and the company hopes to add additional supermarket chains as self-checkout partners following a successful trial with Asda.

On a product basis, a paucity of EuroMillions rollovers pushed draw ticket sales down £111.6m to £2.15b, while National Lottery scratchcards and online Instant-Win games enjoyed a modest £44.4m rise to £1.7b.

Camelot CEO Nigel Railton cautioned that the ongoing pandemic uncertainty means the company’s fiscal H2 “will, no doubt, be very challenging,” while claiming his outfit has “the strong track record and experience required to carry on raising vital funds for those who need it most.”

Railton’s boosterism comes as the competition heats up for the next National Lottery tender, the winner of which the UK Gambling Commission estimates could be announced by next September. Camelot’s competitors include Czech lottery and betting giant Sazka Group, which officially declared its UK intentions last month.

Earlier this month, Sazka announced that it had hired Sir Keith Mills to chair its UK bid, and the company has since added Emma Young as its transition lead, Gerry Walsh as its chief of UK partner and distribution strategy, Rob Clarke to head up HR and organizational requirements and Steve James as network area lead.

Whoever wins the new 10-year National Lottery contract will face additional operating restrictions, as the UK government is planning to raise the minimum age for purchasing online lottery products from 16 to 18 years, in line with other UK-approved online gambling products.