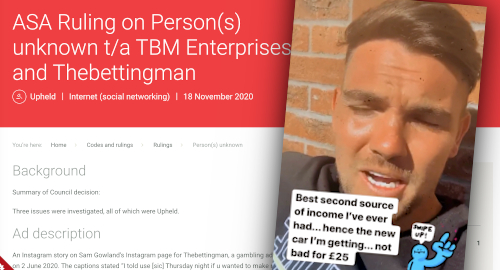 A sports betting tipster promo has resulted in a spanking by the UK’s advertising watchdog, while the country’s gambling regulatory boss has warned that licensees are still making too many “poor judgments” in their marketing efforts.

The Instagram story featured captions detailing the alleged winnings Gowland had reaped after placing wagers with tips provided by Thebettingman. Gowland called betting the “best second source of income I’ve ever had … hence the new car I’m getting,” while urging his followers to check out the tipster service “if u wanted to make money.”

The complainant noted that Gowland’s posts didn’t contain the required #ad hashtag indicating that it was a paid promotion. The ASA took exception with the fact that Gowland was (a) suggesting betting as a path to achieving financial security, and (b) only 24 years old at the time, which broke ad rules requiring gambling pitchmen (and women) to be at least 25.

A spokesperson for the tipster service claimed it hadn’t asked Gowland to make the posts, while Gowland claimed that the posts were indeed promotional in nature but he’d been ignorant of the #ad requirement. The ASA ultimately upheld all three issues that were the subject of its investigation and instructed the parties not to color outside the lines in this fashion again.

Meanwhile, UK Gambling Commission (UKGC) CEO Neil McArthur cited advertising as a key area of concern in his recent annual address to gambling CEOs. McArthur noted that it had been one year since he challenged operators to rein in their advertising excesses, including taking “a 25+ age approach to prospecting ad campaigns on social media.”

Last month, UK advertising regulators opened a consultation on “new strengthened rules and guidance for gambling ads to protect children and young people.” Among the proposals are a ban on spokespersons with strong appeal for under-18s, including “prominent sports people and celebrities, and also individuals like social media influencers.”

The UK government is reportedly prepping the launch of its long-overdue review of the 2005 Gambling Act, the outcome of which will undoubtedly result in further marketing limits. But McArthur warned operators that the UKGC “will not be taking our foot off the accelerator whilst the review takes place,” and “none of you should get distracted” from the goal of making gambling safer for UK residents.