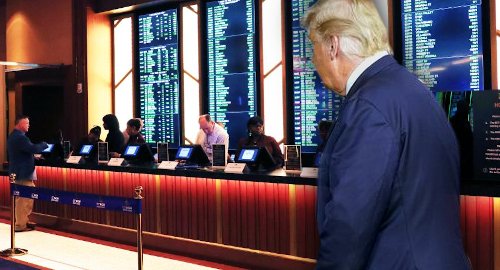 Figures released by the Indiana Gaming Commission show the state’s licensed sportsbooks handled nearly $231m in wagers in the month of October, up from $207.5m in September and the second straight month the state has set a new handle record. October’s revenue of $21.1m was also in record territory as well as being a 50% rise from September.

In Iowa, the Iowa Racing & Gaming Commission reported its betting licensees handling a record $81.9m in October, around $9m better than September’s total. Retail wagering was up 21.6% to $25m while digital bets more than doubled to nearly $57m.

Iowa’s October betting revenue hit $9.2m, around $4m better than September. Digital revenue shot up 140.2% to $6.4m while retail revenue dipped almost 10% to $2.7m. The William Hill sportsbook at Penn National Gaming’s Prairie Meadows racino won the month with handle of $19.8m (all but $1.4m of which was wagered online) and revenue of $2.3m.

West Virginia calculates its betting and iGaming figures on a weekly basis, making direct month-to-month comparisons somewhat awkward. The West Virginia Lottery reported betting handle of $44.6m and revenue of $3.74m in the four weeks ending October 31, compared to $59.2m and $4.6m in the five weeks spanning August 30 to October 3.

West Virginia’s two online casino licensees – DraftKings and BetMGM – reported total spending of $53.1m in October, a 29% drop from September’s five-week total, while revenue was down 17% to $1.9m.

Detroit’s casinos are currently operating at only 15% capacity due to COVID-19, which theoretically limits in-person wagering, yet their slots and table revenue was down only 18.9% year-on-year to $93.8m, so the few Michigan gamblers that are allowed inside appear to be positively gagging for it.