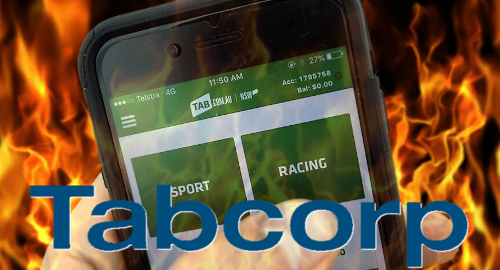 Australian betting and lottery operator Tabcorp Holdings is apologizing to punters, investors and racing bodies after a technical outage cost the company around AU$10m in lost earnings.

Tabcorp’s TAB, Keno and Gaming Services operations went offline on Saturday morning and the retail, digital and telephone betting disruption continued through midday Sunday. The systems were shut down again Sunday evening for a full restart but were reportedly back to relatively normal by Monday morning. Tabcorp said it was doing its best to restore “optimal service levels in coming days.”

Tabcorp issued a statement saying the outage was due to “a smoke and likely fire incident at a third-party managed data center in Sydney,” stressing that there was “no evidence” of any cyber skullduggery or threats to customer data. The data center in question was operated by Global Switch, which said “there was no fire” although “one customer had several servers and equipment affected.”

The outage could have been timed better, as it coincided with the final day of the Melbourne Cup racing carnival. The shutdown of TAB’s betting operations left many punters with no choice but to patronize so-called corporate bookmakers (Sportsbet, Bet365, etc.) although even these operations were impacted by disruptions to TAB-specific exotic wagers.

While some races were postponed until Monday, the outage is believed to have deprived TAB operations of around AU$120m in lost betting turnover. Tabcorp said the cockup would impact the company’s earnings “by less than $10 million.” Investors tut-tutted at the news, pushing Tabcorp shares down 3% by Monday’s close.

Tabcorp CEO David Attenborough called the outage “unacceptable” and the company has launched a “comprehensive and urgent review” into the incident. Attenborough apologized to bettors and racing stakeholders for the “significant disruption” caused by the outage.

Racing Victoria warned that it still wasn’t sure of the full impact on its business, “but it will be insignificant.” The body also said it would be seeking “a clear and frank explanation from Tabcorp on how this happened and what they will be doing to ensure that it doesn’t occur again in the future.”

In other Tabcorp news, last Friday saw the company issue a statement refuting media reports that it was a private equity takeover target. Tabcorp said it “is not aware of, and has not received, any proposal in respect of the company or its businesses.”

The Australian had reported that Sportsbet/Beteasy founder Matthew Tripp had been approached by a private equity group regarding a planned AU$9b takeover of Tabcorp, while another hedge fund was reportedly eyeing an AU$3b bid for the company’s wagering operations.