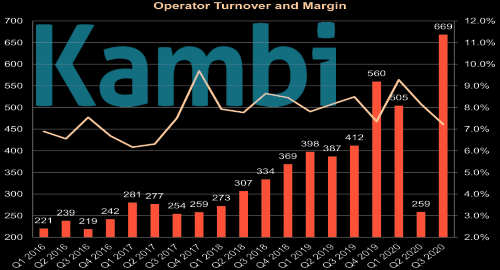 Sports betting technology provider Kambi Group set a record-setting pace in the third quarter of 2020 on US expansion efforts and the resumption of major league play.

Figures released Friday by the Stockholm-listed Kambi show the company generated revenue of €28.1m in the three months ending September 30, up 22% from the same period last year. Operating profit nearly doubled to €6.5m as margins gained 8.4 points to 23.3% and after-tax profits shot up 122% to €5.1m.

Kambi’s good fortune came as major leagues returned to action following their pandemic-related suspension this spring. This resulted in betting turnover at Kambi clients rising 62% year-on-year to €669m, easily outpacing the previous high of €560m in Q4 2019. Kambi CEO Kristian Nylén said the difference between Q3 and Q2 2020 “couldn’t have been starker,” with September accounting for 43% of Q3’s total.

The resumption of North American major league play boosted the Americas segment’s share of Kambi clients’ Q3 revenue to 43%, up from 28% in Q3 2019, resulting in the traditionally dominant European segment slipping below 60% for the first time.

Nylén said Kambi was closing out 2020 “in great shape” and with “growing confidence” after surviving the “toughest challenge” in the company’s history.