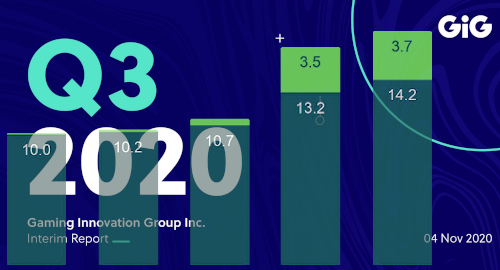 Online gambling operator Gaming Innovation Group (GiG) reduced its net losses in the third quarter of 2020 as the company adjusts to its new purely B2B focus.

Figures released Wednesday show GiG generated revenue of €17.9m in the three months ending September 30, a 78% rise over the same period last year. The company reported earnings of €3.2m versus a loss of €400k last year, while net losses shrank from €8.4m to €4.9m.

GiG has undergone a significant makeover since Q3 2019, which featured sufficiently dire results to prompt the company to undertake a strategic review that led to the sale of its customer-facing operations to Sweden’s Betsson AB this spring. These operations included the Rizk brand, which went live on GiG’s platform in both Croatia and Spain during Q3.

That spring sale saw Betsson sign on as a client of GiG’s platform services unit, which reported revenue up 51% year-on-year to €5.4m, while the unit’s earnings loss narrowed to €100k from €2.1m in Q319. GiG added six new platform clients in Q3 (and two more in the current quarter), most of which will go live early next year.

GiG’s media services unit reported revenue up 7% year-on-year to €8.6m although this figure was flat on a sequential basis. GiG’s World Sports Network affiliate site was recently licensed in West Virginia and Tennessee, bringing the site’s US presence to nine states, while its Casino Tops Online is licensed in New Jersey and Pennsylvania.

The sports betting services unit remains a minnow with revenue of just €200k and negative earnings of €700k, although this latter figure was €1.1m better than Q3 19’s loss, thanks in part to a reduction of headcount from 75 to just 17 this year. GiG recently signed a deal with data provider Betgenius that it hopes will give the betting unit a kick up the backside.

GiG reported marketing expenses of €4.5m in Q3, more than triple the sum expended last year. Around €2.9m of this rise came via the launch of New Zealand casino operator SkyCity Entertainment’s online casino, the success of which was also the chief driver of GiG’s revenue growth.

While GiG’s October revenue is reportedly running 42% ahead of last year, GiG CEO Richard Brown warned that there might be “short term impact” as Germany transitions to its new regulated online gambling market. But the long-term forecast was far brighter, in part due to Germany’s Tipwin signing on a new online casino client.