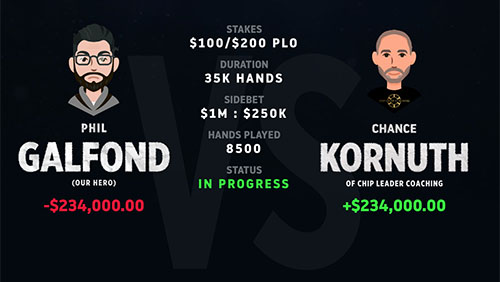 The action has been fast and furious, there have been big swings this way and that and both men have kept us thoroughly entertained on the Run It Once Twitch channel during the month of October.

After some fantastic PLO action, Phil Galfond is $234,000 down in his latest challenge against former WSOP bracelet winner Chance Kornuth after 8,500 hands.

While that may sound bad enough, such are the odds and stake of the sidebet, which would see Kornuth cash for another $1 million

Playing at blinds of $100/$200 per hand, there are bound to be a lot more swings in the next 26,500 hands, after all, there are 35,000 hands to take place in total in this mammoth challenge, far more than Daniel Negreanu and Doug Polk will play in their 25,000-hand clash that starts on Thursday.

The betting odds have really swung in Kornuth’s favour this week, with Galfond’s favourite status seriously under threat for the first time.

While Galfond was a huge favourite just a month ago, he is currently a 1.86 chance, just a few pots being lost away from Kornuth, who at 2.00 possibly represents the best value.

While Galfond has it in his locker to mount a comeback, as he revealed to us in our exclusive interview a few months back, Kornuth finds himself in a great place, both professionally and personally. Reporting his progress back to fans and players via his Chip Leader coaching site, Kornuth has put together a spectacular run of form in the challenge and is long enough in the tooth to know how quickly he could experience some variance – it’s Pot Limit Omaha and he’s been around the block long enough to understand how it all works.

That said, he’s in great form and Galfond clearly has a lot of respect for his opponent, jovially bemoaning his multi-tasking ability during last week’s losing days at the felt in the Galfond Challenge:

You can watch the highlights of Day 15 right here, with Kornuth’s advantage now nearing a quarter of a million dollars. It’s really amazing to see how well he is doing and how his positive mindset is giving him a ‘chance’ of what remains an upset in sportsbetting terms.

Up at 5am for business meetings, writing 2500 word posts, all while losing hundreds of thousands at the poker table. I really can do it all.