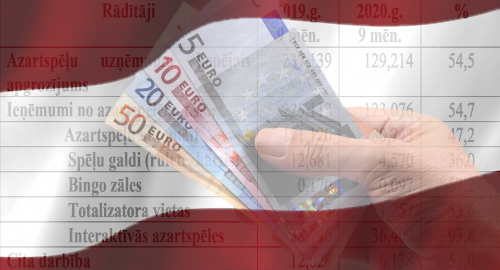 Latvia’s online gambling operators fared better than they expected during the government’s pandemic suspension but that doesn’t mean they’ve gotten over the slight.

The major decline was the result of – surprise! – COVID-19 and, specifically, the Latvian government’s reaction to the pandemic. In March, the government ordered a halt to land-based gambling and followed that up in April with an online ban, despite local licensees’ loud protestations (and lawsuits) that the coronavirus didn’t spread over the internet.

Latvia’s government lifted the gambling ban in June, but the damage had been done, particularly on the land-based side. Revenue from slot machines in casinos and gambling halls was down by more than half to €80.7m, while casino table games slid 64% to €4.6m. Betting shop revenue was off 46.4% to €1.25m, bingo dipped 43% to €97k and ‘other’ products fell by half to €6.1m.

Latvia’s nine licensed online operators fared far better, sliding only 6% to €36.4m. However, considering that the first nine months of 2019 showed operator revenue growing by more than one-third, it’s clear that some major momentum has been lost.

The online disruption is clear from the quarterly figures, which show Q3 revenue of €15.5m, only €350k off Q1’s total, while the Q2 figure comes in below €5.1m.

The slowdown wasn’t entirely the Latvian government’s fault, as borne out by the online vertical numbers over the first nine months of 2020. Online casino revenue was almost unchanged from 2019 at €27.5m, while poker rose more than 50% to €466k. But the pandemic halt of major sports activity pushed online betting down more than one-fifth to €8.4m.

To be fair, the government wasn’t just picking on local online licensees, as the registry of unauthorized online gambling domains grew by an impressive 417 names since the start of the year, bringing the total to 1,623 since the blacklist was launched in 2014.

Also undergoing impressive growth was Latvia’s national gambling self-exclusion registry, which launched in January. This list contained just over 13k names as of October 26, up from 5,400 who signed up in the first two months.

Meanwhile, a local busybody has started an online petition aimed at convincing local legislators to return Latvia to those halcyon days of zero online gambling. The petition even cites this spring’s temporary ban as a sign that such a concept is no longer out of the realm of possibility. The petition to fend off ‘the degradation of society’ is so far less than 5% toward its goal of acquiring 10k signatures.