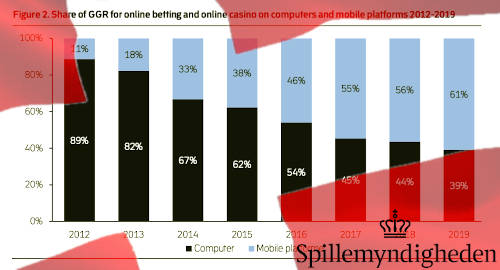 Denmark’s gamblers have increasingly shown a preference for online betting ever since the launch of a competitive, regulated market in 2012.

On Tuesday, Denmark’s Spillemyndigheden regulatory body released a study that tracked the nation’s slow but steady transition away from land-based gambling to locally licensed online gambling operators. Danes who gamble online also overwhelmingly prefer doing so via mobile devices rather than desktop computers.

The study noted that Denmark’s total gambling revenue was DKK7.8b (US$1.24b) in 2012, the first year in which the state-owned Danske Spil was forced to adapt to online competition. Of that sum, around DKK2.4b was spent online, representing 31% of the total.

That online share has increased every year since, resulting in online spending of DKK5.2b out of a total DKK9.8m in 2019, giving online a 54% share of last year’s pie. Online officially overtook land-based gambling in 2018 with a 52% share.

Over the same period, the share of digital gambling conducted via desktop computers has steadily decreased as Danes embraced gambling via smartphones and tablets. Mobile devices accounted for just 11% of digital revenue in 2012, rising to 61% in 2019. Mobile first eclipsed desktop in 2017 with a 55% share.

Denmark is one of only three European markets – the others being Sweden and Norway – in which digital claimed the majority of gambling revenue in 2019. Only Swedes (59%) topped Danes in online preference, with Norway (52%), the UK (45%) and Finland (45%) rounding out the top-five.

Spillemyndigheden attributed Danes’ online preference in part to “a high degree of digitalization” in Danish society. This current year is something of an outlier, given the global pandemic’s impact on gambling activity, but Denmark’s Q2 market stats showed online casino as the only gaming vertical to post annual growth.

In September, Spillemyndigheden announced that over 1,000 Danes had called the StopSpillet problem gambling helpline since its launch in January 2019. With every call representing a person in trouble, StopSpillet manager Linda Lomborg chose not to celebrate this milestone but did express pride that the program had been able to help so many individuals.

Of these 1,000-plus calls, 58% came from gamblers, 38% came from relatives of these gamblers and the remaining 4% from professionals seeking info on how to help clients. Men accounted for 86% of the gamblers who called the helpline, while two-thirds of the relatives were female. Just over half (51%) of callers were men aged 18-35 years old.