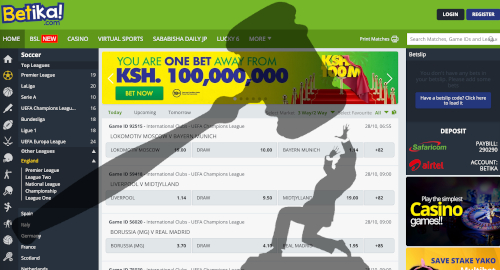 Kenyan online sports betting operator Betika is being sued by a customer for allegedly ignoring his requests to shut his betting account.

On Monday, Kenyan media reported that Mark Ndumia Ndung’u, a local attorney, had filed a petition with the High Court against Betika’s parent company Shop and Deliver Ltd for refusing to close his online betting account despite multiple requests.

Ndung’u claims his initial request to close his account this summer went unnoticed, and a follow-up phone call on July 17 resulted in a Betika rep telling Ndung’u that all he had to do was not make any wagers for a long period and his account would be closed due to inactivity.

Ndung’u rejected this logic due to his stated inability to refrain from betting, and Betika eventually agreed to honor his request but first asked him to undergo identity confirmation. Despite following Betika’s instructions, Ndung’u claims his account was still active in August.

Irate, Ndung’u filed a complaint with Kenya’s Betting Control and Licensing Board (BCLB) and finally received notice from Betika in September that his account was closed. But in the meantime, Ndung’u suffered further gambling losses of over Sh110k (US$1k) in the first week of August.

Ndung’u is asking the court to force Betika to compensate him for these losses and to stop offering problem gamblers such as himself financial incentives to continue betting after they express a desire to quit.

Betika is currently considered Kenya’s dominant online betting operator following last year’s market exits of SportPesa and Betin, which previously ranked first and second, respectively. Those companies shut their local offices after squabbling with Kenya’s government over back-tax claims and the definition of a tax on betting winnings.

Betika was among the operators targeted by the Kenya Revenue Authority in 2019 but the company’s status as a purely local company with zero foreign investors appears to have afforded it some operational leeway.

In August, Betika renewed its sponsorship of Kenyan Premier League club Sofapaka FC for another two years. The new deal, which expands on the relationship established in 2017, will cost Betika Sh77m (US$707k).

Kenya’s government has done the hokey-pokey regarding its betting tax plans, with legislators repealing the 20% tax on betting turnover in June and President Uhuru Kenyatta signing the change into law. But the government almost immediately declared plans to reintroduce the tax within six months.

When the KRA originally made its back-tax claims against dozens of betting operators, it instructed mobile payment processors to withdraw the companies’ pay bill numbers and SMS codes, while the central bank cut services to suspended licensees. The Gaming Bill 2019 later eliminated mobile money transfers altogether, even for tax-compliant operators.

Last week, the National Assembly’s Committee on Sports, Culture and Tourism proposed a number of amendments to the Gaming Bill 2019, including lifting the prohibition on mobile money transfers to fund online betting accounts. The Committee instead wants to prohibit wagering via credit cards, echoing restrictions imposed in other markets, including the UK.

The Committee also proposed doubling the minimum online betting stake from Sh50 to Sh100. The Gaming Bill 2019 imposed the Sh50 limit as a means of ensuring truly impoverished punters couldn’t gamble away the milk money but the Committee apparently felt the bar was still too low.

LEGISLATORS AT WAR WITH GOV’T

Just prior to the Committee’s proposals, National Assembly legislators rejected a wholesale rewrite of the Gaming Bill by Interior Secretary Fred Matiangi’i, a noted antagonist of the country’s gambling sector.

Matiangi’i’s proposals included a minimum 50% local ownership requirement for betting operators, a fixed June 30 annual expiry date for all gaming licenses (regardless of when they were issued) and compelling operators to surrender to the state any winnings not collected by punters within three months (down from 30 months in the Gaming Bill).

Matiangi’i claimed that his proposed changes were “intended to enhance the operational capability of the gaming authority and to ensure it operates seamlessly in a legal regime.” But legislators expressed concern that the enhanced powers could be subject to abuse by someone with either an axe to grind or an ulterior motive.

Regarding the latter, during the war Matiangi’i waged with the gambling sector last year, MP Paul Ongili accused the Cabinet Secretary of selectively targeting Kenya’s market leaders because he had “an interest” in BetLion, the Victor Chandler-led betting site that launched in Kenya in 2018.