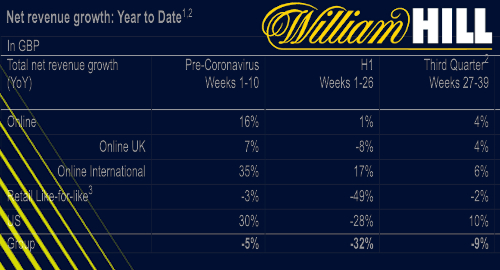 The Q3 stats did demonstrate an “encouraging” bounce from the 32% revenue decline the company posted over the first half of 2020, a period that saw the total shutdown of its UK retail division and the suspension of major sports activity due to COVID-19.

Hills’ online operations, which accounted for two-thirds of its H1 revenue, posted net revenue growth of only 4% in Q3, with the UK up 4% and international online rising 6%.

Hills noted that its tepid UK growth reflected “the implementation of strong guard rails” to ensure it lives up to the local watchdog’s pandemic responsible gambling consumer protections. Those restraints will likely only increase as Hills suggested the government’s long-threatened review of the Gambling Act would likely commence in a few weeks.

International online gains (such as they are) were in part due to gussying up the Mr Green brand’s live casino and the addition of some new high-profile games. But Hills noted that its German-facing operations will likely take a £10m earnings hit next year as the company adapts its offering to the new market restrictions.

Retail operations, which accounted for 26% of H1 revenue, fell 2% on a like-for-like basis (aka treating the hundreds of shops Hills closed last year as if they were shut in both periods). Hills added that it feels good enough about its retail performance that it will repay the £24.5m it received from the government’s Coronavirus Job Retention Scheme.

While Hills said retail football has started to “return towards” pre-pandemic levels, several regions of the UK – including Manchester, Liverpool and Wales – have been pushed into a second lockdown and Hills said every 100 closed shops result in lost earnings of £2m per month.

The William Hill US division saw revenue rise 10%, although part of that gain came via the absorption of CG Technology’s Nevada sportsbooks. Hills launched operations in four additional US states during Q3 – bringing its active US presence to 14 states – resulting in a 55% rise in betting turnover during the quarter.

During Q3, Hills received “elements” of its financial mega-windfall from this spring’s machine gaming tax victory and the company said it expects to collect the balance of its refund “imminently.” The cash infusion allowed Hills to repay its revolving credit facility during Q3, which should allow the company to hit its quarterly debt-to-earnings target.

Hills had little to say regarding its proposed acquisition by US casino giant Caesars Entertainment, saying only that its shareholders will receive more information on the deal specifics “in due course.”