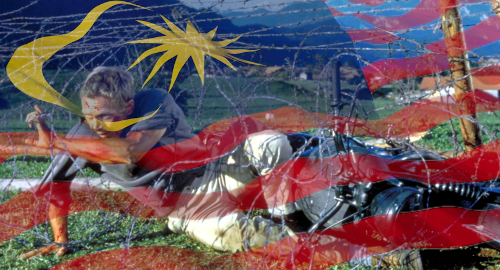 Malaysian authorities have a lot of ‘splaining to do after they allowed a major illegal online gambling operator to slip their grasp while leaving a local courthouse.

Last week, the Malaysian Anti-Corruption Commission (MACC) announced the detention of several senior members of the Kuala Lumpur police suspected of protecting an illegal online gambling and money laundering ring. At the time, we noted that this story likely had legs, and it seems those legs had happy feet attached.

While some of the (non-cop) individuals connected with that online gambling operation were in the process of being released on bail, police gathered at the entrance of the MACC headquarters in order to re-arrest the suspects to assist investigations into the gambling operations.

But before those cops could pounce, the suspected ringleader of the gambling operation made good his escape. CCTV footage showed him climbing over a side gate of the compound with the help of two bodyguards, after which he jumped into a car waiting on the side of the road and hasn’t been seen since.

The escaped suspect was later identified as Goh Leong Yeong, a 32-year-old who allegedly ran multiple online gambling sites based in Malaysia catering primarily to mainland Chinese gamblers. Goh, who was known as ‘Alvin,’ was also reportedly involved in a money laundering operation on behalf of numerous Malaysian celebrities.

Malaysian media have since reported that Goh distributed up to RM4m (US$964k) per month to several dozen members of the local establishment to ensure his operations weren’t rumbled. The recipients reportedly included “influential people, officers and policemen who have been detained or investigated by the MACC.”

Such a sum implies that Goh’s local operations, which reportedly began five years ago, must have been significant. Some hard questions are likely now being asked to determine whether this cash outlay ensured Goh’s escape from police clutches.

Goh also reportedly employed a bogus ‘datuk seri’ aka ‘grand commander’ honorific title to give his operations a degree of respectability. (Is anyone else having flashbacks to the Duke of Buckley episode of Fawlty Towers?)

It’s unclear if this next item is related, but Monday saw Kuala Lumpur police announce the arrest of 48 Chinese nationals accused of running an illegal online gambling operation out of three luxury condos. Police seized 245 phones, 41 computers and a small amount of cash from the suspects, whose operation reportedly targeted mainland Chinese gamblers through social media platforms.