The Texas Rangers have never won a World Series, but their new home ballpark will house a champion as the 2020 World Series between the American League champion Tampa Bay Rays and National League champion Los Angeles Dodgers begins Tuesday night from Globe Life Park in Arlington. The Dodgers have “home-field” advantage for four of the seven games if the series goes that far and are -200 on the series line with the Rays at +170. 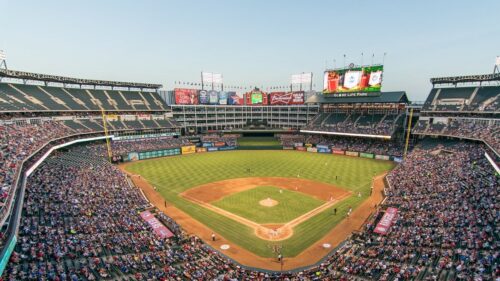 It’s a true David vs. Goliath matchup even though Tampa Bay and Los Angeles were the only two clubs to win at least 40 games in the coronavirus-shortened 60-game regular season. It’s just the fourth time in the Wild-Card era (since 1995), the teams with the best record in each league will meet in the World Series.

The Rays are a no-name franchise with little money to spend and zero national cache. The Dodgers have money to burn and are loaded with stars like former AL MVP Mookie Betts and former NL MVPs Cody Bellinger and Clayton Kershaw. The Dodgers’ NLCS roster included 12 players who have been All-Stars in their careers.

There is one major link between the franchises: Dodgers president of baseball operations Andrew Friedman helped build the winning culture in Tampa Bay as its former general manager. The lone time the Rays reached the World Series was in 2008 when they lost to the Philadelphia Phillies. Friedman was running the show in Tampa then, leaving after the 2014 season to become one of the highest-paid GMs in the game.

Nowadays, Friedman probably makes more per year than any Rays player does. The Dodgers are in the World Series for the third time in four years, losing in seven games in 2017 to the Houston Astros and in five the next year to the Boston Red Sox. The last title in team history was in 1988 when Kirk Gibson’s memorable walk-off Game 1 home run helped propel Los Angeles over the favored Oakland A’s.

The Dodgers have by far the better lineup overall; shoot, not a single everyday player for the Rays likely would even start for Los Angeles. However, the Rays have the edge in starting pitching and especially in the bullpen. That there are two scheduled off days in this series as opposed to none in the LCS round should help Tampa in regards to its pitching staff.

No starting pitchers have been announced yet for Game 1, but the Dodgers are -166 favorites with a total of 8.0 runs.