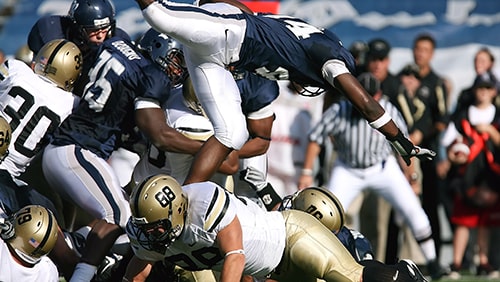 The NFL season has gotten off to a great start and fears of a massive outbreak of COVID-19 seem to have been unfounded. So far, only one player has tested positive for the coronavirus, and this is seen as a very good sign for the fate of the rest of the season. Week 3 will wrap up tonight, but most of the action played out yesterday and there was definitely no shortage of upsets and blowouts. Without a preseason to work out the bugs, the first three weeks of the season have essentially been the try-outs for a number of players, and a couple might need to start preparing for some changes.

For the second week in a row, the Atlanta Falcons crawled all over their opponents and had the game in the bag. Last week, against the Dallas Cowboys, they were up 39-24 and had no chance of losing the game. The only thing left was to run out the clock – overcoming a 15-point deficit isn’t an easy feat. However, the ‘Boys did it, and won the game 40-39. Almost as if history were repeating itself, the Falcons failure continued yesterday as they blew a 26-10 lead against the Chicago Bears to ultimately lose, 30-26. It might be time for Atlanta to make a couple big changes. Fans aren’t happy, nor are those that took the -182 moneyline on the team. Fortunately, anyone who chose the Over on the 46.5 Over/Under and took the Bears at +155 is enjoying their rewards.

The Bears started Mitchell Trubisky under center yesterday and he might not survive. After two and a half quarters in the game and zero production, Trubisky left in favor of Nick Foles. The replacement not only brought consistency for a quarter and a half, but he led the team to victory. Trubisky has to be feeling a little nervous.

The Cleveland Browns walked all over the Washington Football Team (WFT) yesterday, just as oddsmakers had expected. Dwayne Haskins had more turnovers for the WFT than he did touchdowns – three interceptions and a fumble – and all four resulted in Browns’ points. Despite this, the WFT was actually up in the fourth quarter, but the Browns decimated the opposition and walked away with a 35-20 win. It’s the first time in six years that they’re above .500, and the -358 they were getting before the game shows that oddsmakers knew something good was coming. The Over/Under of 44.5 was easily surpassed, thanks to the fourth-quarter surge.

In an NFL rarity, a game ended in a tie yesterday. The Cincinnati Bengals, led by rookie Heisman Trophy winner Joe Burrow, met the Philadelphia Eagles and, while Burrow did a good job, he didn’t have an offensive line to protect him. He threw for two touchdowns with zero interceptions, but the Eagles defense broke through the line several times, included once that forced Burrow temporarily off the field. With a final of 23-23, this game was a complete wash.

The Las Vegas Raiders got off to a good start this season, but couldn’t keep their strength up against the New England Patriots yesterday. The Pats were the favorites at -278, but the Raiders were expected to put up a better fight. That didn’t happen, with Las Vegas taking a 36-20 loss. The Over (46.5) hit, but only because the Pats took control.

By the end of the day, with several upsets in the books, nine games surpassed the Over/Under, while six didn’t quite get there. However, all games covered the spread. The last game of Week 3 is tonight, with the Kansas City Chiefs taking on the Baltimore Ravens. Both teams are 2-0 on the season, and the Ravens are getting more attention by oddsmakers, listing them at -182 against +155 for the defending Super Bowl champions. The Over/Under of 54.5 would seem to scream that this is expected to be a hugely exciting matchup.