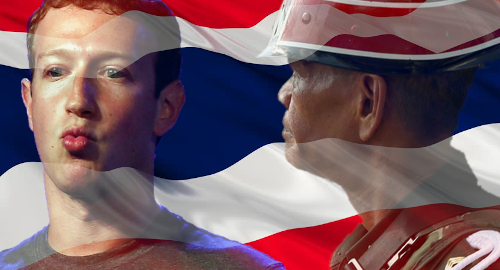 Digital Economy and Society Minister Buddhipongse Punnakanta said the social media giants had failed to comply with court orders requiring them to block hundreds of online accounts within the required 15-day period. Facebook reportedly blocked only 215 of 661 offending accounts while Twitter had blocked only four of 69 suspect accounts on its platform.

A police spokesperson warned that the social media firms could face fines of THB200k (US$6,300) plus additional daily fines of THB5k until the accounts are blocked. Given Facebook’s earnings, the penalties hardly represent an existential threat, so the Thai government may be forced to take more drastic measures in future.

Speaking of, Thailand’s government announced Sunday that it was putting pressure on local mobile telecom operators and internet service providers to “immediately” block access to over 1,200 online gambling domains. Prime Minister Prayut Chan-o-cha is basing his new ‘get tough’ approach on the popular ‘think of the children’ platform.

The offending sites are already the subject of blocking orders issued by local courts but the telecom ops have reportedly been slow in acting on these orders. The laggards have reportedly been told that they will be given 15 days to get with the program or face the government’s full enforcement wrath.

It may be unrelated, but the government’s anti-online ramp-up comes not long after a Thai MP made waves by suggesting it was time to revise laws to permit land-based casino operations as well as online gambling. Mongkolkit Suksintharanon justified the proposal based on the fact that gambling is going on regardless of the existing prohibition so the government might as well earn some sorely needed revenue from it.

A 2019 survey showed Thailand’s ban on all forms of gambling except domestic lotteries was an abject failure, with participation in unapproved gambling options even more popular than detailed in the previous survey in 2017.