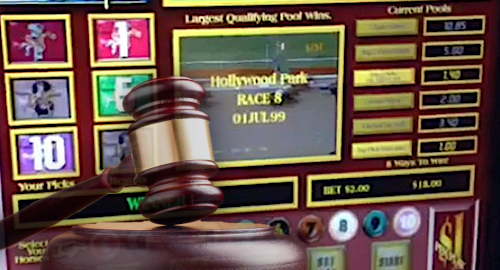 UPDATE: Churchill Downs Inc issued a statement saying it “does not use the Exacta system in any of its [historical racing machines] in any facility in Kentucky” and said the company “will work within our legal rights and in coordination with Kentucky legislators to ensure the ongoing legal operation of our HRM facilities in Kentucky.”

Kentucky’s pseudo-slot machines are under threat after a court ruled that they don’t fit within the state’s pari-mutuel wagering definition.

On Thursday, the Kentucky Supreme Court unanimously declared that some ‘historical racing’ (alternately known as ‘instant racing’) machines currently operating in the state do not constitute pari-mutuel wagering as defined by the Kentucky Horse Racing Commission (KHRC).

Specifically, the Court found that the Encore system (formerly known as Exacta) “does not create a wagering pool among patrons such that they are wagering among themselves as required for pari-mutuel wagering.” Bettors are also not betting on the same event in the same race.

The machines feature virtual replays of real-world races with all the identifying information stripped out, making wagering on the outcome essentially the same as betting on a random number generator (RNG) slot machine.

The state has no casinos but has thousands of historical racing machines installed at four gaming venues: Ellis Park, Keeneland/Red Mile, Kentucky Downs and Churchill Downs Inc’s Derby City Gaming venue, which has proven to be a gold mine for CDI since its September 2018 launch.

The Court’s ruling overturned a 2018 circuit court ruling that found no fault with the machines. The plaintiffs, a ‘think of the children’ bunch known as The Family Foundation, took issue with the fact that state regulators had attempted to squeeze the machines into the existing pari-mutuel definition without any accompanying legislative action.

The Supreme Court said Thursday that if the state wanted the machines to keep humming, legislative action would be required. If the definition of pari-mutuel wagering was to be expanded, “that change must be made by the people of this Commonwealth through their duly-elected legislators, not by an appointed administrative body and not by the judiciary.”

None of the historical racing operators have so far commented on Thursday’s ruling but the Family Foundation rushed out a release calling on state racetracks with historical racing operations to unplug their machines until the legislature could act, and (presumably) leave them unplugged if legislators prove unwilling to risk a public backlash.

But it’s hard to see how legislators could walk away from such a lucrative contributor to the state treasury. Historical racing generated handle of $2.26b in the fiscal year ending June 30, up from $2.03b in fiscal 2019, despite the three-month pandemic-related closure of gaming venues this spring.

The state collects 1.5% of that handle through an excise tax, which was worth $33m in the last fiscal year. The state had been pondering raising that rate to 3.5% before the pandemic hit, which would have meant an extra $60m for the state. Kentucky will now collect nothing until a legislative fix can be found.