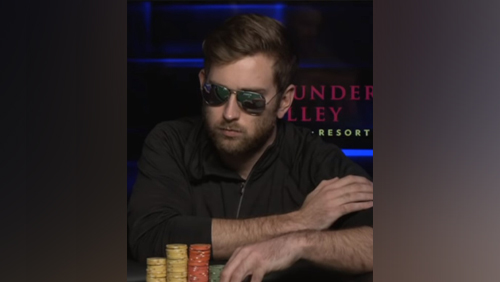 The last bracelet is perhaps the sweetest to win of the World Series of Poker, and that honour fell to Connor Drinan last night as he wrapped up the WSOP Super MILLION$ bracelet win.

With just the final nine remaining, there was a lot on the line, including a very interesting poker celebrity side-bet, but there was mainly the matter of the majority of the $8.7 million prizepool to fight for first.

It took just 150 minutes to find a winner in the end as Connor Drinan outlasted the eight opponents who stood between him and a WSOP result of $1.4 million that more than equated to all the money he’d made in WSOP events before the final.

Drinan’s route to glory was not an easy one, but it was the worst possible start for the short-stacked Kenneth Smaron, who lasted just one hand. All-in from the big blind with queen-jack, he flopped top pair, but Christopher Kruk had a straight and flush draw, which came in with instant service on the turn.

Busting in 8th place, Arsenii Malinov held ace-queen and now in the doomed big blind seat, he called Sylvain Loosli’s all-in with nine-seven. A nine and a seven on the flop did for Malinov’s chances and the field was down to seven players.

Kruk moved into the lead, but he would go from hero to zero in spectacular fashion as he busted in 7th place having led the field with the same number of players remaining. He was unlucky to do so, too, dropping a chunk of chips with pocket jacks when up against Kazakhstani player Daniyar Aubakirov’s ace-ten, a ten-high straight from Aubakirov doing enough to double-up on the river in what would be a crucial 5th street card worth over $800,000 when the dealing was done.

That story would run right the way until the heads-up, but Kruk’s tale was over when his three-bet all-in with ace-jack ran into the monster hand of pocket aces held by Connor Drinan.

Suraj Mishra had led the event when the final table action kicked off, but his race was run in 6th place as he went all-in with pocket tens and saw Drinan eliminate him with pocket nines when a nine landed on the flop.

It would be Sylvain Loosli who busted in 5th place after he ran short and moved all-in with king-four and was called by Drinan, whose ace-deuce was enough to deliver another player out of contention.

Drinan was running away with it, and the runaway train only sped up after he busted both American player Chris Oliver in 4th place for $548,450 and Russian Viktor Ustimov in 3rd place for $755,754.

Aubakirov was the man charged with attempting to derail the seemingly unstoppable Drinan, and he gave it his best shot, doubling several times when left with a short-stack. Eventually, though, his luck ran out  and so did his chances of winning the bracelet for Kazakhstan. His last chips went into the idle with a dominating hand, Aubakirov’s ace-jack outran by Drinan’s ace-nine.

Drinan didn’t just win the $1.4 million to go with the WSOP bracelet thanks to his bet earlier in the series against Daniel Negreanu, as ‘Kid Poker’ previously advertised on Twitter.

Action on this bet has a $100k cap per individual player. @ConnorDrinan is officially sold out. https://t.co/vro9QoFy7K

Connor Drinan could celebrate a remarkable victory, while runner-up Aubakirov could at least console himself with being the only other player in the event to cash for seven figures, winning $1,041,414 thanks in no small part to that miracle straight earlier in the day bumped him five places up the ladder.