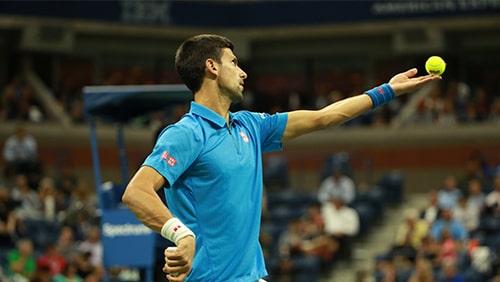 Novak Djokovic, the number-one ranked tennis player in the world, got a little carried away during his U.S. Open match against Pablo Carreño Busta, accidentally drilling a line judge with a ball. Fortunately for the judge, she didn’t receive major injuries, but Djokovic’s actions forced game officials to disqualify him from the Grand Slam event. Sports gambling fans had shown a lot of interest in the 33-year-old Serb to win, but were left wondering what would happen to the wagers they had placed. They have now received a bit of good news, as several major sportsbooks have agreed to refund certain bets completely.

DraftKings, FanDuel and PointsBet, among others, are ready to take a hit in the name of fair play. PointsBet, which saw around two-thirds of all money wagered on the event put toward Djokovic, announced the decision on Sunday, tweeting, “Novak Djokovic was defaulted from the U.S. Open for striking a line judge with a ball…Just more 2020 craziness. BUT, we are refunding ALL Outright Tourney Bets and today’s pre-match result bets on Djoker IN FULL.”

DraftKings joined in, as well, announcing that it would refund all futures bets. It added that bettors should receive credits to their accounts, which were to be issued within 24 hours following the announcement. FanDuel was there, as well, saying that it was going to return “all straight futures and odds boosts wagers on Djokovic to win the tournament.”

Game officials had determined that Djokovic had to be disqualified in accordance with Grand Slam rules for “hitting a ball dangerously or recklessly within the court.” Everyone agreed that his actions were unintentional and that he wasn’t aiming for the judge, but were egregious enough to warrant his forced exit. He has already been fined and had ranking points deducted, and could receive additional punishment after the incident is reviewed in greater detail.

The disqualification will probably be the center of debate for some time to come. There is some inconsistency in tennis rules and they’re not always applied the same across different tournaments. In 2016, Jelena Ostapenko allegedly threw a racket and hit a ball boy at the ASB Classic in Auckland, New Zealand. The action was determined to be “unintentional” and didn’t result in a DQ. Ostapenko was hit with a code violation, but nothing else.

Last year, Russian tennis player Daniil Medvedev was in the third round of the U.S. Open, taking on Feliciano Lopez out of Spain. He became frustrated with how things were going – and with the crowd – and ultimately mistreated a ball boy, threw a racket onto the court and even gave the crowd a one-finger salute. Obviously, none of these actions alone was potentially life-threatening like Djokovic’s errant hit, but, combined, they indicate extremely poor sportsmanship. Medvedev, however, was only given a fine for his actions.

Medvedev, ranked fourth in the world, is now the odds-on favorite to win this U.S. Open due to Djokovic’s unexpected departure. Hopefully, he can keep his temper tantrums to a minimum and not cause any more scenes like those from last year.